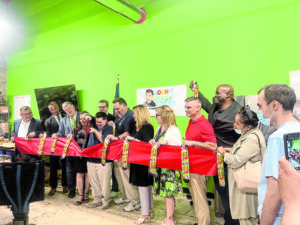 A grand opening must have an atmosphere that matches the spirit of the company. John’s Crazy Socks was able to accomplish this on June 8 when the fun, loving company made its move to Farmingdale from Huntington, being warmly welcomed with an amazing drumline and choir. It is a main tenet of theirs to make sure their workers and customers are happy, from the grand opening of their new warehouse and right to when John quality checks every sock that goes out for shipment.

Their backstory is simple: a father and son set out to change the world by starting John’s Crazy Socks in December of 2016. Upon graduating high school, John Lee Cronin had to decide what he wanted to do for the rest of his life. Together, John and his father, Mark X. Cronin, figured out that he had few options to choose from with school or work. He did not like the job options he had, so he told his father his great idea.

“I want to make one,” John Cronin said.

While their work has started and resides on Long Island, their reach is vast. They have shipped more than 380,000 packages to upwards of 88 different countries. With this move to the bigger warehouse in Farmingdale, they are hoping to do even more.

On the horizon is the opportunity to open a thousand businesses across the country. The more space they have means the more opportunities they have to make a difference. Their money does not just go into their pockets, it goes to charity. A full list of the charities is available on their website and they do all they can to raise as much money as possible for them.

“[As of] today we have raised over $500,000 for our charity,” Mark Cronin said.
Although this is already a fantastic move forward, John’s Crazy Socks wants to do more. It is a sad reality that only one in five people with differing abilities will be employed. This company is aware of this fault in the system and aims to correct it.

“We want to create jobs,’ Mark Cronin said. “So we’ve been very fortunate in creating 34 jobs, 22 [being] held by people with differing abilities.”
John’s Crazy Socks wants to be a symbol of what obstacles can be overcome.

They are aware that people with differing abilities are just as capable as anyone else and they want the rest of the world to see it. John is a pioneer, showing off what is possible.

“Now he’s testified before Congress, spoken to the United Nations, spoken to 5000 people at a Microsoft conference,” Mark Cronin said.

Their recognition does not end there. At the grand opening of their new warehouse, John’s Crazy Socks was recognized by the Town of Huntington, the Town of Babylon and by Congress. He was given gifts from proclamations to a flag that has actually flown over the capital.

There is no reason for anyone to believe that John or anyone else is less accomplished, just because he has differing abilities. Their company stands to display that these promising people deserve to be given a fair chance. People with differing abilities should be treated equally to everyone else.

Both Mark and John were born and raised on Long Island, native to the Town of Huntington which is where John graduated high school and where they started their business. To show their reverence to the area, they have a special plan for orders made between their new warehouse and the home and Huntington village. “I am doing home delivery,” John Cronin said.

“We’ll be here forever,” Mark Cronin said. “This is where our roots are.”