Syosset Public Library released its list of virtual events for August. For more information, check out their virtual calendar at www.syossetlibrary.org.

Are you excited to hear about our favorite books? Join the Readers’ Services Department for fun, lively, genre-specific presentations of all the books we can’t stop talking about. Leave with a list of great reads.

Three professional graphic novel artists face off in three rounds of Drawful 2 — a popular
Jackbox game that tasks artists with interpreting ridiculous prompts! You, the audience will get to vote on who does the best job. A Q&A with the artists will follow.

The Tragedy & Trials of the NYC Triangle Shirt Factory Fire

Relive the events of the hundreds of immigrant women who tragically died in one of New York’s worst disasters. Learn about the many changes in safety and building codes that came about as a result of this tragic event. The presenters are Howard Ehrlich & Harvey Sackowitz, both of which are professors at St. Johns University.

Grab your morning coffee and spend some time with Katherine Center, author of How to Walk Away and What You Wish For. Katherine will chat about her feel good books and engage you in a Q&A.

Deborah Kerr is an actress noted for her elegant demeanor often playing characters that were prim, refined and repressed. Her career began on the London stage before she became a major star in British and Hollywood cinema.

She received six Academy Award nominations and never won, but in 1994 she was awarded an Honorary Academy Award. Her range of roles is extraordinary. This talk includes many clips and photos as a tribute to this legendary actress. The presenter, Marc Courtade, is the Executive Director of the Huntington Arts Council.

The Prado Museum in Madrid, Spain houses one of the world’s finest collections of European art. This royal collection includes works by the painters to the kings, Velazquez and Goya, as well as Flemish and Italian masters such as Hieronymus Bosch, Raphael and Titian. This lecture will take you through the highlights of their collection. The presenter, Mary Vahey, is a professor of Art History at Suffolk Community College.

Wednesday, Aug. 12, 7:30 p.m. – 8:30 p.m.
Grab your favorite summer beverage and join our zoom webinar for a fun evening of Q&A with Donna and Bree — better known as Kit Rocha. “Kit” has written several thrilling paranormal, sci-fi, and romance mash-ups including their most recent series about Mercenary Librarians.

The Opinion of the Court: Understanding Miranda vs. Arizona

“You have the right to remain silent.” This sentence, and the others that inevitably follow, has been an ingredient of American criminal procedure for the past half a century. During this time these words have not only become a component of our legal system but a part of our popular culture as well. While the admonitions of the accused are familiar to most of us, the circumstances surrounding the case that created them remains in relative obscurity.

In this lecture, we will discuss elements of the opinion, including judicial interpretation, legal technicalities and the continuing impact of Miranda on law enforcement today. The presenter, James Coll, is a professor at Hofstra University and Nassau Community College.

Genealogy for the Enthusiastic Amateur

Get in-depth information about a wide variety of research sources and databases featuring live demonstrations of many and the opportunity to interact with presenters. The presenters will be reference librarians.

Are You Still Afraid of the Dark? with D.J. MacHale

D.J. MacHale, showrunner for the original Are You Afraid of the Dark?, stops by this virtual
campfire to talk about our childhood fears! Why did AYAOTD resonate with us so much? Why do we love Creepy Pastas, Scary Stories to Tell in the Dark, and do we still love to be scared? Live Q&A will be available through the chat function.

The Great American Songbook, also known as American Standards, is the canon of the most important and influential American songs from the early and mid-20th century. They include the most popular and enduring melodies that were created primarily for Broadway musical productions and Hollywood musical films. The Songbook comprises standards by Jerome Kern, George Gershwin, Cole Porter, Irving Berlin, Richard Rodgers and many others.

During this 10 part series, we will have an opportunity to watch and listen to vocalists and arrangers both past and present, interpret these timeless melodies and examine how their placement within the context of a musical show or film added to their historical significance and made them truly unforgettable. The presenter will be Richard Knox.

Join Sal George, who is a playwright and historian, as he reminisces and tells backstories about the movie voted the #1 comedy of all time by the American Film Institute. The hilarious Some Like it Hot features classic comic performances by Tony Curtis, Jack Lemmon and Marilyn Monroe. 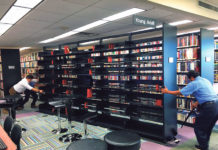