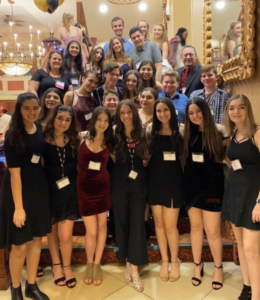 Every high school has a drama club. But what makes drama so special?

For thousands of years, theater has been an essential part of civilization. From Indian Sanskrit plays to Japanese Noh theater, to Greek dramas and Broadway musicals today, theater has helped us process our lives and see a different perspective. It is the attempt to organize the chaos of the human experience into meaningful patterns, unpacking and then reassembling enormous questions on the nature of being alive. Syosset High School’s drama club, Association of Creative Thespians (ACT) and a few school faculties strive to carry on that great tradition, pursuing excellence and upholding theater as an important art form for the current age.

Theater demands that society examines itself, encouraging us to tangibly connect with the world. Unlike in movies, in theater, actors not only share an experience and space with fellow audience members, but also the actors who are performing, creating a valuable and human connection. Also, the immediate quality of live theater creates a distinct and unique experience in that very moment that will never exist again. Ray Gessner, assistant principal of Syosset High School, highlighted how essential arts are for the foundation of a balanced world, especially in our fast-paced age.

“Art as an outlet for emotional expression provides a release from the day to day and allows for a deeper understanding of and empathy for people,” Gessner said. “Theater, and the associated arts, when done well, are always visceral and reflective of our time and place. The very collaborative nature of the [ACT] program provides a need for interconnections that might otherwise not occur.”

With theater, we experience all aspects of humanity: profound psychological states, characters’ inner motivations, and climactic conflict and resolution. Through witnessing the personal journeys of others, theater encourages us to value our truths, to support new and diverse voices, and helps promote empathy, reminding us we’re not alone. From a technical standpoint, though, it takes people from all types of different backgrounds to make theater.

“We know that skills which encompass traits such as creativity, ingenuity, innovation and originality are not easily replaced by technology,” Durante said. “Therefore, we place a high

priority on theater education because although we don’t necessarily know what new jobs will be created in fifteen years, we do know that the skills necessary to perform those jobs are cultivated within our program.”

Just as significant is the tight-knit community that comes out of doing theater. Using the already present audience-engagement aspect of theater, ACT puts on social events, promoting community service, strengthening the community, and boosting student morale. The emphasis on inclusion and acceptance at the club also translates to the many opportunities to get involved aside from acting. Liv Radianu, a senior actress at Syosset and ACT’s vice president, shares her thoughts on the loud, boisterous drama kid stereotype.

“As a drama club, we will obviously have a performance element,” Radianu said. “But there are also opportunities for directing, writing plays, operating tech, building and painting sets, doing hair and makeup or costumes. ACT truly does offer a broad spectrum of opportunities on and off stage.”

ACT produces three main stage shows every year, with many opportunities for student-directed productions. This season, ACT has already put on Almost, Maine, a play consisting of glimpses from nine personal stories about the beauty and pain of love. Two more shows are also coming up, The Little Mermaid and Julius Caesar, in March and May, respectively. Every production team spends countless hours working and growing together. Gene Connor, director of ACT’s productions, said he’s greatly enjoyed helping students begin a path to their dreams.

“We’ve had alumni work on Broadway, tour nationally, and making careers in educational theatre, music composition and directing,” Connor said. “My greatest joy is knowing I had a small part in where they are today.”

With such a passionate, engaged community and many ways to get involved, it’s no wonder ACT has flourished all these years. Dr. Thomas Rogers, superintendent of the Syosset Central School District, shared his support for Syosset’s long history of excellence in the arts.

“I’m very proud of ACT and the Theater Arts program, which doesn’t shy away from technically challenging material and executes every aspect of the performance–from sets, to music, to staging–with tremendous professionalism,” Rogers said. “Perhaps more importantly though, I love seeing students express themselves, work collaboratively with large groups of diverse peers, explore important human themes and yes, have a blast, through theater arts.”

The Little Mermaid will be playing at Syosset High School from Thursday, March 12 to Sunday, March 15.