The Jericho Chamber of Commerce continues to grow just more than a year after its creation. With about 5,000 members, the chamber is revelling in success, largely thanks to the work of founder Todd Shapiro.

Come Feb. 19, Jon Ledecky, majority owner of the New York Islanders, graced the chamber with his presence. The native New Yorker discussed his rags to riches story, telling the crowd how he went from $100 in the bank to forming U.S. Office Products and becoming a successful business owner.

“This guy buys teams,” Shapiro joked. “Who does that? Jon Ledecky.”

But before Ledecky took to the podium, Frank Borrelli Jr., owner of Borrelli’s Italian Restaurant, discussed his own family’s journey and how the local community has supported them over the last 65 years. It all circles back to the Islanders.

When the Islanders were coming back to Nassau, thousands of people were rallying to make sure their team would be where they belong. And plenty of the positive vibes happened at Borrelli’s.

As the Islanders moved to Brooklyn’s Barclays Center, Long Islanders wanted the team back in Nassau. Like Ledecky’s predecessor, Charles B. Wang, he strove to give back to the community.

“He brought his partner [Scott Malkin] and bought the Islanders from Charles Wang,” Shapiro said. “They came in and saved our team. What William Shea did for the Mets, he did for Long Island.”

Ledecky spent almost an hour with the crowd, discussing his whole life journey.

“Every one of you—and we sincerely feel this way—is part of an extended family,” Ledecky, who purchased the Islanders in 2014, said. “The Islanders are a family.”

A humble Ledecky discussed his upbringing, beginning with his dad struggling as a refugee from Czechoslovakia. He didn’t speak English, so he worked as a dishwasher at the Howard Johnson’s off Exit 9 of the New Jersey Turnpike. Eventually, his father worked his way into military intelligence, solidifying his U.S. citizenship. 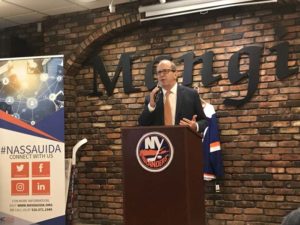 On top of working full-time and raising a family, the Ledecky patriarch also went to night school for 22 years. He earned not only a bachelor’s degree, but a master’s degree and a PhD as well. That’s how the younger Ledecky learned the work ethic that brought him success.

“In what other country can you be an immigrant’s son in one generation and become the owner of a hockey team,” Ledecky said.

“I did one thing right through my entire business career,” he said. “Every time a credit card application came, I filled it out and I got all of these credit card checks. When I lost my job and didn’t have many job prospects, I said, ‘It’s time to step up and make a move.’ My 13 credit cards had $213,000 of credit card availability.

“Feeling sorry for myself, I felt it would feel good to write them to myself. So I went to the Riggs National Bank in Washington and I started a business. It was 21 percent interest it on it.”

That’s when he started U.S. Office Products, taking a gamble on himself and an idea of helping small businesses.

But Ledecky’s journey to the top of the business world wasn’t the only part of his talk.
The NHL owner had a message for the crowd, especially for those in Jericho and Syosset.

“We have something with the Islanders that’s an incredible opportunity for change on Long Island,” Ledecky said. “In the community, we do a lot of things. At Robbins Lane Elementary School in Syosset, we have the Blades for Grades program.”

The Blades for Grades is part of the Islanders’ way to give back to the community. It “rewards students for working hard in school and earning good grades. Students applying for the program must show that they have received an A or moved up a letter grade in a subject, in order to earn complimentary tickets to an Islanders game,” according to the team’s site. Robbins Lane is one of the top participants in the program. Ledecky also touted the team’s new Belmont Arena project, which is set to be completed by the start of the 2021 season. The arena, he said, will include 5G internet speeds and will house local businesses. Besides the arena, the property will also include a massive retail village, perfect for business owners to take part in.

“We want to spend our money with Long Island based firms because that’s how you grow an economy,” Ledecky said about the ongoing construction at Belmont.

Before Ledecky departed from Borrelli’s, the Jericho Chamber of Commerce wanted to show their appreciation for him. The chamber gifted the Islanders’ owner with a custom hockey stick, as well as a gorgeous map of Long Island to hang up in his office.

Ledecky’s message was clear: if you have the right mindset, you can be successful.