At a recent ceremony at the Jericho Volunteer Fire Department on North Broadway, ex-fire chief Bob Lubcker, who was also a 50-year member of the department at the time of his death, was honored.

Lubcker was a lieutenant captain deputy chief and chief of the department. He was also
department treasury and a fire commissioner.

For many years, he ran the department’s fundraising drive. He worked with many chiefs, designing the drive’s brochures and mailing them out, three times each year. For these reasons, it was decided to name the fund drive office in his honor. He was a friend,
neighbor and was responsible for getting many, including former chief Richard Schiraldi, to join the department. 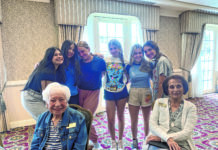