It’s been more than a year since New York State Senator Jim Gaughran took his official oath of office. Since then, he has made quite the dent in the legislative agenda, introducing several major bills.

But to start 2020, Gaughran, who represents the Fifth District, has several goals he is aiming to accomplish. However, he admits it will not be easy.

The New York State budget, which is due in April, might need a major overhaul. To start things off, Gaughran wants to lead the way in reversing some of the controversial bail reform laws, which might include giving judges more of a say going forward. The Tribune spoke to Gaughran in his Syosset office, discussing a variety of issues.

Q: What are you looking forward to throughout this new legislative session?
A: One of the things we have is how we are going to manage the state budget going forward. The governor is going to submit his preliminary budget. There’s going to be a lot of negotiations. My main concern is to make sure the Long Island school districts are getting the state aid they need. We’re going to do that on the reality that the current budget is $175 billion and there’s a $6 billion shortfall. We have to figure out how to raise $6 billion. I’m opposed to raising taxes, particularly on middle-class families that I represent. Statistics show and based on what happened last year, the more you raise taxes, the more people leave New York State. Raising taxes might not even generate the revenue that you need.

Q: What are some things you want to accomplish this year that you couldn’t do in 2019?
A: I am sponsoring a bill to try to fix the criminal justice reforms that were in the governor’s budget last year. I’ve been pushing for legislation to give judges more discretion on setting bail. The legislation that I filed last year didn’t have a lot of support. Now, it’s starting to get some support. I’m also pushing for the new funding that’s coming in for long-term improvements for the Long Island Rail Road that includes providing additional trains for the Oyster Bay line. I’d like to see one morning and one evening additional train. It’ll help congestion on other lines. I’m pushing for the electrification of the Port Jefferson line. Recently, we passed 10 bills for limousine safety, two of which I sponsored. One makes it clearly illegal for a driver of a limousine to make a U-turn, increasing the penalties of that with possible jail time.

Q: The governor’s office just announced substantial grants for several water districts, including about $11.5 million for the Jericho Water District. How will that have an impact for Jericho? 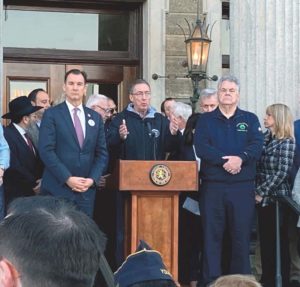 A: That is part of the money we appropriated in the budget last year. That money is going to allow water districts to meet the new water quality standards, specifically the 1,4-dioxide, which is a contaminant in many wells. It’s very expensive for water districts to treat this water. They have to build brand-new systems. I did that back when I was chair of the [Suffolk County] Water Authority. I created the system that the districts are using. This money will help them. I’m happy the state is giving the money they need.

Q: With the rise in anti-Semitism, what is being done besides the state requirement of Holocaust education in schools?
A:There’s legislation to create education about the swastika and the noose. We need to make sure all of our kids know the horrors of the Holocaust. When I was a kid, we met Holocaust survivors. They made sure we saw the tattoos, and that was very powerful. It’s more important now to include it in our education because young people today are separated from that. Fewer and fewer people are around to give direct testimony.