At 7:30 p.m., Barry Goldblatt received a call. On the other side was a representative from PSEG Long Island, who was preparing to share some good news.

But no one expects to get a phone call from an energy company so late in the evening.

“I was a little suspicious when someone said they’re calling from PSEG at 7:30 p.m.,” Goldblatt said. “I thought it was a phone scam, or they were trying to sell me a service.”

It turns out that PSEG was giving Goldblatt, the commander of American Legion Post 175 in Syosset, an offer he couldn’t refuse.

“Instead, they were offering to paint our post,” he said of the generous offer. “They’ve done other projects, I understand, for veterans.”

The post, which hadn’t been painted for quite some time, was to receive a fresh coating thanks to PSEG come Nov. 14, just three days after Veterans Day.

As the sun perked up over Syosset on a perfect fall day, more than a dozen PSEG Long Island employees headed to the American Legion to lend a hand and a brush.

“Many of our employees are veterans or have family members who are veterans,” Suzanne Brienza, director of customer experience and marketing at PSEG Long Island, said at the post. “It’s important for us to give back to those employees. It’s good for team building. It’s part of our job.”

Goldblatt, who has been commander of the Syosset post for about five years, was astonished at the work the PSEG employees did.

“We’re taken back by this, to say the least,” he said. “It’s a total surprise. Again, it’s very much appreciated.”

This wasn’t the only volunteering event that PSEG Long Island had to honor Veterans Day, either. There were multiple vo 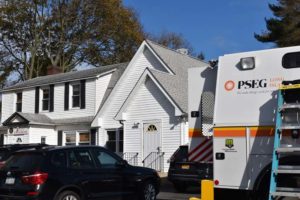 lunteer programs available for the organization’s employees throughout the week, including ones at the Northport VA Medical Center in Suffolk County and American Legion Post 1082 in East Meadow.

“One of the big things we do is give back to our community,” Brienza said. “What we wanted to do this year is give back to our veterans. We have more than 200 employees over four days doing eight events. We’re here at the American Legion in Syosset to refurbish paint, as well as give back to those who have served us.”

As the PSEG volunteers slapped the brand-new white paint on the American Legion’s walls, Goldblatt and his comrades looked on in awe.

The American Legion is located at 68 Berry Hill Rd. in Syosset. Post 175 has about 100 members, but many of them are snow birds, traveling down south for the winter to avoid the cold weather.

The extra assistance to re-paint the post is something all of the members won’t forget any time soon.

“It’s very important,” Goldblatt said. “We’re part of the community. I personally get involved in a ceremony when an Eagle Scout is attaining that rank. I go to whichever facility it is being held at. I present a certificate and say a few words. Syosset is a great community.”