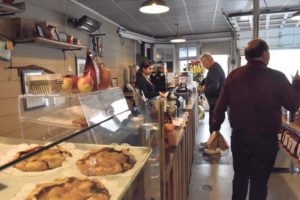 Come Thanksgiving week, the Jericho Cider Mill will be stuffed with apple pies. Dozens of them. At least 8,000.

That’s a whole lot of apple pie, and it’s the cider mill’s way to show an American tradition.

“It started in 1820 by the Hicks family, led by John Hicks,” Kerry Ketsoglou, manager of the cider mill, said. “It used to be further up the road. But when the state decided to build Route 106, we moved to where we’re standing today.”

The Jericho Cider Mill sits just off Route 106, and you can’t miss it. Cars park on the side of the main road, with customers running into the modest store to take part in this fun way to showcase their pride. And it’s certainly worth it, too.

At 199 years old, the cider mill is one of the oldest of its kind in the United States. There are only three cider mills on Long Island.

As you approach the property, especially between Halloween and Thanksgiving, you can’t help but notice how American the cider mill truly is. There are cases and cases of apples sitting outside of the mill’s humble abode, along with other fruits.

“Our products are all natural,” Ketsoglou said. “There’s no preservatives. People want to see what they’re eating and drinking. The more fresh and local, the better.”

Everything that the Jericho Cider Mill sells is made right in New York. Whether it’s the homemade apple pie, baked right in the back of the mill, or the Hudson Valley apples they use, this is as local as it gets.

Inside of the mill, there are about 20 employees, whose duties vary throughout the year. Yes, the Jericho Cider Mill is open year-round.

As soon as the doors to the mill open, the aroma of fresh, warm apple pie flows into your nostrils. That’s not all they have, either.

“Being that we’re here for 200 years next year, everyone needs that Thanksgiving pie,” Ketsoglou said.

But what is the key to a good apple pie?

“It’s a mixture of sugar and cinnamon,” he said. “They’re not too sweet. They’re buttery. When you don’t need a knife to cut through it, that’s how you know it’s good.”

The apple cider, made right in the heart of Jericho, can be purchased as either a pint, half-gallon or gallon, featuring the raw taste of a perfect apple. It’s impossible to find apple cider as fresh as this.

That’s not all that the Jericho Cider Mill offers.

“A few years ago, we started making cider ice cream,” Ketsoglou said. “We have some crazy flavors, with different types of cinnamon.”

The Jericho Cider Mill is located at 213 Route 106 in Jericho. For more information, visit their website at www.jerichocider.com.