About 15 years ago, the Mandel family had a baby girl, Madelyn. But the journey up until her birth was full of trials and tribulations.

“In the end, we had one healthy baby,” Jason Mandel said. “It took us down a lot of different paths.”

Now, Mandel and his wife Carrie are opening up about the difficult road to eventually having their oldest child. Mandel just published Having Maddie: Our True Story, based on the family’s experience with rare fertility issues.

“My wife kept an excellent journal of some of the things that had taken place,” the family patriarch said. “The story itself shows all of the intense things that happened to us, with medical developments, challenges, fertility treatments, medical developments during the pregnancy that were extremely rare and complicated. It required us to make extremely difficult decisions along the way.”

Having Maddie: Our True Story walks readers through all of the tough decisions the Mandel couple, then in their late 20s, had to make. However, the biggest lesson is that people experiencing this issue, many who often feel like they are alone, actually have others who are willing to open their arms.

“The lesson, which I didn’t understand until I published the book and got feedback from people, is that as rare as our particular situation was, everyone has their own story,” Jason Mandel said. “Business friends that I knew but hadn’t spoken to in a long time reached out and spilled out their guts about their stories.”

But the issues didn’t stop once Carrie was finally pregnant.

The Mandel matriarch had a difficult pregnancy, being told by doctors she had an extremely rare case.

“We had two embryos placed in, and they told us there was a fairly good chance none of them would take, a reasonable chance one would take and a very remote chance for both,” Jason Mandel said. “We never discussed the chance of both taking and both splitting.”

Suddenly, not only did Carrie have one baby inside of her, but she actually had two pairs of twins, an extremely rare occurrence.

“There was a decent amount of physical suffering from the procedures she had to go through, including a rare surgical procedure in Florida from one of the few doctors who could do it at the time,” Mandel said of his wife. “There was a development that caused one of the healthy babies to share blood flow with another one of the babies, which would have ultimately led to the full loss of the pregnancy. After that surgery, she was in the hospital having severe contractions. She was required to be on full-time bed rest for three months.” 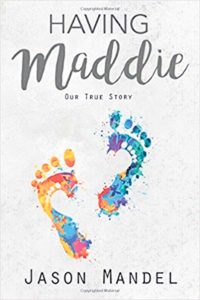 Eventually, Madelyn was born. And thanks to her birth, it led to Carrie being able to have an easier time moving forward in terms of future pregnancy, resulting in having a younger son, Carter.

This book, which is self-published and can be purchased on Amazon, gives couples hope as Mandel shares key tips of how to persevere through the tough times.

“The major lesson is for a lot of people feeling alone about their story, whether it’s pregnancy or some other challenge, they’re not,” he said. “There are people who go through intense experiences.”

In August, the Mandel family also unveiled Let’s asQ, “a [card] game to break the ice with randos, learn more about your besties and learn something about yourself.” The deck can be played by basically anyone, no matter the age, as long as they want to open up.