Two years ago, Syosset High School graduate and then-Stony Brook University student Danielle Anderson took on a challenge. She created an Instagram page, not just to show friends and family what she’s up to, but to showcase her superior makeup skills.

“I was doing it for fun and I didn’t know it could become a bigger thing,” Anderson said.
At first, the Instagram page was put on private because she was embarrassed, unaware of how popular it could become. But in November 2017, the page went public and @bydanielleathena went viral.

“I started just taking mediocre pictures on my iPhone with no lighting or anything,” she said. “I just did it with the artificial lighting in my dorm.”

What Anderson didn’t know is that going viral with thousands of people looking at her makeup skills came with a big incentive. A key part of growing as an influencer is to not only show off a particular look, but to tag key brands.

When she started sending notifications and adding hashtags to her posts, which consist of different eye shadow shades, major brands 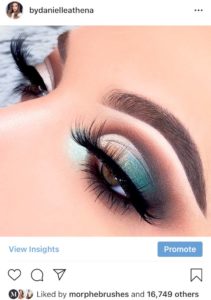 began sharing them on their profiles. Suddenly, major companies, like Anastasia Beverly Hills and Morphe Brushes, were noticing her skills. Among her unique combinations are glitters, mattes and metallics.

“If I used their product, I wrote it in the description,” she explained. “I took inspiration from Instagrammers who are bigger than me. I knew what was more appealing to brands based on what they reposted from people. I tried to take little things from everyone else and give my pictures their own unique twist.”

Anderson’s account has grown so much that the brands she tags started reaching out to her earlier this year to try out their makeup for free to showcase to her massive following. 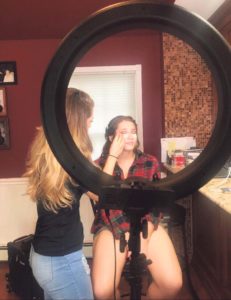 “I don’t ever buy makeup anymore,” Anderson said. “I get packages pretty much every day.”

To top it off, this young entrepreneur is starting to make money from her account. It’s turned from something that’s fun to one that can pay the bills, plus potentially land her a full-time job at one of the brands she’s working with.

“It’s crazy because I thought getting makeup was enough for me,” she said. “I want to keep growing and possibly start a YouTube.”

As Anderson continues to grow her own social media stardom, she has a piece of advice for those in the area who have even one small idea.

“If you have any passion that you think you can make a career out of, start doing it,” she said. “Getting the idea out of your head and making some sort of action will spiral into getting followers to make your goal happen.”