Just three days after the Town of Oyster Bay unveiled the 9/11 Walls of Honor at TOBAY Beach, the Syosset Fire District followed up with its own ceremony.

When passing by the Syosset Fire District’s headquarters at 50 Cold Spring Rd., locals will notice something different. It’s exactly what was needed in order to pay tribute to those who risked their lives for America 18 years ago.

The fire district, in coordination with the Town of Oyster Bay, unveiled the Firefighters Memorial Park on Sept. 8. The service was led by Commissioner Giovanni L. Graceffa, with a benediction and blessing from Deacon Ted Kolakowski, as well as speeches from town Supervisor Joseph Saladino and former State Senator Carl Marcellino.

“The park is a tribute to those that gave their lives while helping and protecting others,” Graceffa said. “May we never forget those that died on 9/11, especially the 343 members of FDNY, and those who have succumbed to 9/11-r 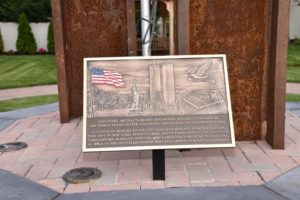 The park was a joint project between the Syosset Fire District and the Town of Oyster Bay. They created a monument, featuring the words “Line of Duty Deaths.” Syosset High School senior Talia Schatz sang the national anthem and “God Bless America,” while Syosset graduate Matthew Wong played “Taps.”

In the middle of the park are two large beams of steel, which were recovered from Ground Zero.

The monument was formerly at Syosset Memorial Park, located at the corner of Jackson Avenue and Underhill Boulevard.