When it comes to political campaigns, candidates always try to outperform their opponents. None, though, have ever done something like what Democratic incumbent Legislator Joshua Lafazan (Woodbury) is doing.

The 25-year-old, who is the youngest politician in Nassau County, has a staff of 75 eager interns, some as young as 12 years old. Leading the way for the campaign? None other than 20-year-old Chase Serota, who met Lafazan while attempting to create a student position on the Jericho School District Board of Education.

“In a lot of ways, you have to work twice as hard when you’re a young person to prove you’re capable of success,” Serota, who is entering his junior year at the University of Pennsylvania, said. “It’s a lot better to show that rather than tell people that. We’re inspiring the next generation of leaders to get involved in politics.”

Lafazan firmly believes in the capabilities of his interns. Though they might not even be eligible to vote for him, that doesn’t matter in his mind. The importance of what they are doing is what matters.

“The role of the internship program is nobody gets coffee, because the only work we do is real work,” Lafazan, who teaches a course on running for office at Long Island University, said. “These kids get access to guest speakers, like members of Congress, the county executive and the minority leader of the Legislature. They’re gaining real-world experience, either working on research and policy by drafting memos, communications by doing writing, absentee ballots and sales ability.”

The intern team became the largest of its kind in the history of the Nassau County Legislature. In two months, the interns combined to knock on more than 25,000 doors, surpassing Lafazan’s previous county record of 23,000 during his successful 2017 campaign. The average age of the interns, Lafazan said, is 16.

“I remember hearing about this program and really wanting to join so that I could understand how the big world of ‘government’ worked,” Nicholas Fernandes, a 12-year-old student at South Wood Middle School and an intern for Lafazan’s campaign, said. “Although I’m the youngest [intern on the campaign], I still feel like I’m able to help make a change in my community. Being part of this internship taught me that no matter how old you are, you are never too young to make change. From knocking on doors to calling people, I’ve reached out to hundreds of people this summer.”

“What gives me an advantage is I’ve delivered for my constituents for two years now by passing a record number of bills by a freshman legislator,” Lafazan said. “I’ve held town halls in every part of the district. I’m the only legislator that justifies every single vote on Facebook.” 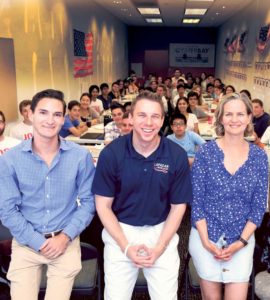 As the campaign reaches the final stretch before the Nov. 5 election, Lafazan is accepting even more interns. He is creating a fall program for high school and college students who want to be part of the incumbent’s campaign.

The best part about the program, in Lafazan’s eyes, is his role as a “big brother” for these kids.

“It’s so special,” he said. “It transcends politics. I’m able to be an older sibling, teaching them about life since I graduated in 2012, which isn’t that long ago. It’s a wonderful thing.”

Instead of limiting the potential of political growth and knowledge for high school and college students, Lafazan firmly believes this is their chance to make a difference.

“It’s on us to get this right because, if we’re successful, other young people across Long Island and the state will look at our campaign as the model to prove young people can be successful in politics,” Serota said.

Lafazan is looking for even more interns as the election nears, and he believes he can make this team of 75 grow into a group of 100.

“Just because you’re in college doesn’t mean you can’t work in politics, too,” Lafazan said.