Stretch Lab, located in the midst of Woodbury Commons, just opened its doors and is ready to give your body a whole new feeling. Get ready to feel looser than ever thanks to the unconventional staff at this stretching wonderland.

“Just the feeling of being stretched here is so amazing,” Chris Tucker, owner of the Woodbury franchise, said. “The demographic for Woodbury is very good and pull people in from a lot of different areas.”

To kick off the lab’s first few weeks, they offered a free 15-minute stretching session. Admittedly, this reporter was skeptical going in.

But that’s when one of the team’s flexologists, who get more than 100 hours of intensive training, took over.

“This is a PNF,” Mike, a physical trainer who just joined the Stretch Lab team, explained, saying PNF is an advanced form of flexibility training.

The series of leg and arm stretches are relaxing, soothing the body and testing one’s flexibility. Mike, along with the other flexologists, will make sure members aren’t in too much pain. They tell people to let them know when they reach a seven on the pain scale, holding positions for several seconds at a time.

When the stretching is over, the blood is flowing and your joints feel as good as new. Seriously, you feel as loose as it gets. 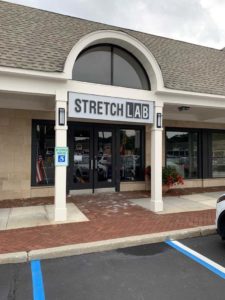 In order to figure out what type of business Tucker wanted to start, he met with a franchise consultant. When he found out about Stretch Lab, he was “blown away.”

Tucker was just 18 years old when he broke his back. He’s experienced lingering pain ever since. When he let the flexologist work on him, he immediately felt a difference and knew this was the perfect business to get involved in.

“The guys at Xponential Fitness know what they’re doing,” Tucker said of Stretch Lab’s parent company. “I thought this would be a great recovery tool for fitness buffs, but that’s proven to be wrong. People are coming who aren’t into fitness or exercise.”

As part of this journey, Tucker said one of the most surprising aspects is that people want someone to exercise them, rather than to do it themselves. That happens to work well for this business, but they also want people to stretch at home.

Kerri Winas Kaley, general manager of the Woodbury fitness hub, has been in the health realm for quite some time. She wanted to prevent heart disease before it was too late. So she became a certified health coach, got yoga certified and an EMT one prior to joining Stretch Lab.

“There’s so much opportunity here for wellness outside of the studio,” she said. “Leaving your desk and getting on a bench for 15 minutes is great. We’re enhancing the blood supply circulating through your body.”

Tucker’s group is already gaining popularity. In the few weeks since its opening, Stretch Lab has worked with several major local group, including folks at Northwell Health.

There are several packages that monthly members can choose from, including a once-a-week 25- or 50-minute session, group programs or plans to get stretched out multiple times a week.

“This is going to help people in their daily life,” Tucker said. “It will make you feel really good.”