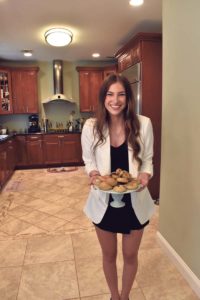 Regardless of her current hair color, the founder of From A Blonde’s Kitchen is one of the most unique business owners on Long Island. When Forgione was 21, she was attending Farmindale State College and working a full-time job. Then, the unexpected happened.

“My company went through a change of ownership and they started re-interviewing everybody,” the Syosset native said. “I was still in college, so I didn’t have a degree yet. They didn’t like that, so I lost my job. I was in the city every day by 7:30, and now I had the entire day until 6:30 free.”

Embarrassed and lost, Forgione didn’t know what to do next. Naturally, she turned to baking as a hobby and stress reliever. But when she started blowing up her own Instagram with pictures of cookies, she felt bad for annoying her friends.

“I started getting inquiries, but I didn’t think I could do it,” Forgione said. “After a few more came in, I thought maybe I can do something with this. Maybe I can bake for a living. I kind of went for it.”

A post shared by FROM A BLONDE’S KITCHEN (@fromablondeskitchen)

That’s when Forgione officially created From A Blonde’s Kitchen. The business has escalated to the point that it is now a limited liability company (LLC), renting out space from Cardinali Bakery in Carle Place.

The 24-year-old baker heads to the space every afternoon. On average, she’ll bake 200 cookies a week, and that’s just of the custom-made ones. Overall, she nears 1,000 cookies, varying between regular chocolate chip ones to the royal-iced treats, cakes and cupcakes. Even if someone is incredibly picky and they don’t know what to get, she’ll find the perfect drop for your taste buds.

And yes, Forgione makes vegan and gluten free cookies, too.

“I do a lot of vegan stuff, too,” she said. “Not a lot of people do it because it’s such a challenge, but I love when people tell me they’re vegan or gluten free.”

But there are certainly challenges to this new career path.

Forgione studied professional communications and minored in business. She didn’t go to culinary school, so all of this is new to her.

“In the beginning, I was most embarrassed to tell my parents,” she said. “I was like, ‘I lost my job. I’m still in college, but I’m not going to look for a new job. I’m going to bake.’ That was a little difficult. I don’t think they took me seriously until eight months in, when I started having consistent orders and I was a legitimate business. I wasn’t some girl baking on the side.”

Now, Forgione is as legitimate as ever. Her bustling baking business, which she runs alone, is busy as it gets.

Legislator Joshua Lafazan, who went to Syosset High School with Forgione, is one of her biggest fans.

“We’re all behind her,” Lafazan said. “I noticed this thanks to the power of social media. She’s a great model for young people everywhere. There’s not one path to success. If you have a dream, you can follow it.”

The goal for Forgione’s business is to eventually have a bakery with a small cafe included in it. She actually started the process of looking for a space, but hasn’t found anything cozy enough to keep the intimate environment that she is aiming for.

“I want to have a legitimate space, either rent or own it,” she said. “I just have to find the right place because everything’s very large and I want to keep it nice and small. I want it to be a little more out east because I really like it out there.” 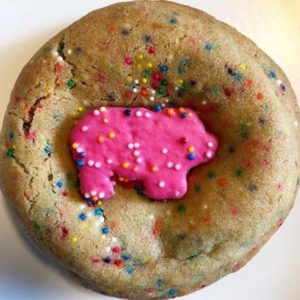 and ships them to customers. But if you’re in the Syosset area, customers can actually pick them up at her house, which she said is less complicated than having people pop up at the Carle Place bakery.

It’s not the most ideal scenario, especially since she still lives with her parents. However, she will never stop chasing her dream. More importantly, she hopes others will take a lesson from her notebook as well.

“It’s never too late to start something and chase your dream,” Forgione said. “You think you’re supposed to have one major, go to one college and get X, Y and Z done. But that’s not how it should be done. Whatever you’re passionate about is what you should be doing.”

And if you’re wondering if the cookies are actually good or not, they certainly are. Forgione uses natural ingredients, catering to each person’s custom order. So get your milk ready and try one (or multiple) of the 13 different types of cookies she has to offer.

If you don’t like one of those, maybe you’ll even convince her to try something new. She’s always up for a new challenge that will go from this blonde’s kitchen into your mouth.