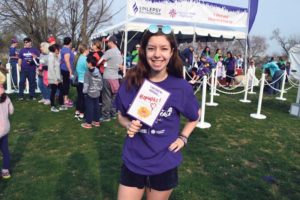 Tara Silberg had just two weeks left of driver’s ed. To get accustomed to the ins and outs of the road, she would drive to Jericho High School with her mother in the passenger seat.

It was Oct. 11, 2015. She was driving a red Volvo, which is fortunately known for its safety features. Suddenly, something wasn’t right.

“I went into the other lane when I was supposed to stay in the one that I was in and turn a second later,” Silberg, now a student at the University of Delaware, said. “I didn’t respond. I switched lanes right before turning left into the entrance of the school.”

Once she got to the light, she knew she just had a seizure. She regained control of the car. But she “didn’t know what was going on.”

Silberg was soon diagnosed with epilepsy. She doesn’t have the symptoms, though, that one normally associates with epilepsy. When she has a seizure, she is aware of what is happening and what she’s experiencing. But she can’t understand things happening around her, like a light turning green or a teacher speaking to the class.

“The experiences and sensations that accompany these seizures are often impossible to describe, even for the most eloquent adult,” the Epilepsy Foundation describes. “And of course, it is even more difficult to get an accurate picture of what people are feeling.”

So when Silberg was diagnosed with complex-partial seizures, it meant no more driving. The neurologist was blunt: This will change your life.

She had been experiencing symptoms for about two years, yet her pediatrician said it was anxiety. That changed on the day of the accident, when she was properly diagnosed for the first time.

“When I’m having a seizure, I’ll try not to talk,” she said. “It takes a maximum of a minute. It’ll go on for 20 to 30 seconds and then, I just need some time to gather myself and come back to where I was.”

Fast forward to 2019 and Silberg is dedicated to helping others. Most of her time is split between either epilepsy groups or Jewish programs, both on and off campus.

Silberg’s impact on others started when she volunteered with NYU Langone Medical Center’s Finding a Cure for Epilepsy and Seizures (FACES), donating her time to a gala after her diagnosis.

With her dedication and love for helping others, the Jericho native was just named a winner of the 2019 UCB Family Epilepsy Scholarship, supporting her life as an honors student in the university’s human services program, as well as president of the Students for Epilepsy Awareness club.

“I applied for the scholarship two years ago,” Silberg said. “I ask myself if I deserve the scholarship as much as anyone else. I try to do as much as I can, but I’m not saving the world quite yet. I went upstairs, told my mom, who was on the phone for business. I shook her a little bit and she was like, ‘What? I’m on the phone.’ I said you need to get off right now, so I told her and she screamed.”

Silberg wants to help those around her. Her diagnosis couldn’t stop her from doing what she loves.

Epilepsy did indeed change her life, but no one knew it would do so in a positive way.

“It was frightening,” she said. “But at this point, if I have to deal with anything, this is what I would choose.”

Thanks to the medication she takes, Silberg hasn’t had a seizure in about a year and a half. In New York, if a person with epilepsy has a seizure within the last six months, it means they can’t drive.

This past February, she finally put the skills she learned in driver’s ed to the test and received her license.

“It’s a little scary, but I’m driving at this point, which is really nice,” she said.

Besides running the epilepsy-focused club on campus, she is actively involved in Jewish life. She is currently interning for the United Jewish Appeal (UJA) Federation of New York, and she’s traveled to Israel. She even participated in the March of the Living, a trip to raise awareness about the atrocities of the Holocaust.

“Israel is where I started getting interested in Jewish life,” Silberg said. “It’s my favorite place. Between BBYO and Hillel on campus and now UJA, everyone in these organizations are very open and welcoming to me and to others as well. Helping others is where I want to be.”

Guiding others is exactly what Silberg does when she’s home, too. She found help at EPIC Long Island, located at 1500 Hempstead Tpke. in East Meadow. It’s a community she can relate to, and she hopes others will find the love she found thanks to EPIC’s many support groups for people of all ages.

And best of all, Silberg is living her best life and making a difference day-in and day-out.