Ever since he was 6 years old, Jericho High School’s Sal Velotti has created memories on the baseball field that will last a lifetime. His passion stems from his role as a bat boy on his older brother’s team. Velotti knew from this young age that baseball would be a big part of his life.

The recent graduate was a co-captain of Jericho’s varsity baseball squad, performing exceptionally well during his final season, earning all-league honors. At the plate, he averaged .421 with nine doubles and a pair of triples.

According to coach Bryan Ciminelli, Velotti is an important leader on the team.

“He is a big influence on our underclassmen, showing them the right way to do things, the right way to practice, how to show up on time and how to work and continue to get better as you get going,” Ciminelli said.

Velotti’s teammates agree that he exemplifies the true meaning of a captain.

“He’s got the loudest voice and is always pushing others to do their best,” co-captain Hunter T. said.

But Velotti isn’t just one of the captains, he’s the team’s biggest two-way threat. While he is a strong defensive asset at the corner and up the middle of the infield, he also dominates on the mound.

“I’m very confident,” Velotti said. “I feel like any time I’m on the mound, I can compete with anyone.”

Sophomore teammate Hunter G. thinks that Velotti’s approach on the mound is unmatched. “When Sal pitches, he always pounds the zone, attacking the hitter,” he said.

“He always finishes off with his splitter because rarely anyone can hit it.”

Velotti attributes his success to the amount of repetition he puts in.

“I try to practice as much as I can and take as many swings off the tee as possible,” he said.

All of these qualities, combined with his incomparable work ethic, is what led the coaches at Widener University in Delaware to make him an offer for next season. Velotti chose the Division III program because “they have a great history. They had 20 wins for the past five seasons, where they made straight semifinal appearances. And the coaching staff is great.”

Those who know Velotti feel his future is bright. According to coach Ciminelli, “Wherever he goes, as long as he stays in some kind of leadership role and continues to do the right things, that’s what I’m excited to see as he gets older.”

Lindsey Komson is a student at Jericho High School 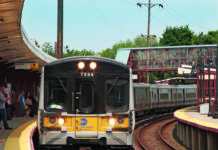