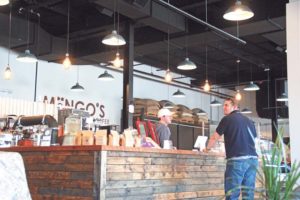 The cold brew will make you wake right up. There’s plenty of caffeine for everyone.

Don’t want the cold brew? That’s fine. You can always order a custom-made coffee, with dozens of options that will give you more energy than imaginable.

You’ll watch as each ingredient is individually placed into an orange mug until it is perfect.
Mongo’s Coffee Roastery and Lounge, located at 170 Michael Dr. in Syosset, is as different as it gets. Its quiet location—just a quarter-mile off the busy Jericho Turnpike—is the perfect fit for what is presumably just a regular coffee shop. But once you get through Mongo’s doors, patrons will be surprised to see coffee being roasted right in front of their faces.

“I decided I wanted to roast my own coffee,” Mitchel Margulis, the founder of Mongo’s Coffee, said. “I’ve been doing it for about 15 years now.”

This isn’t a normal coffee shop. Next to the register is a quadruplet of drinks on tap. It has the look of a bar, but in a coffee shop. There are leather couches, dozens of tables and an actual roaster for everyone to see.

“It’s not just the roaster,” Margulis said. “It’s the lounge. If you live in Brooklyn, you get to go to these lounges. But if you live on Long Island, you don’t.” 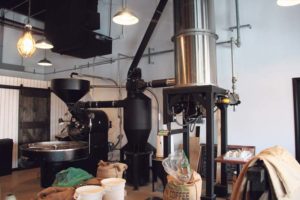 Margulis, who also lives in Syosset, has been in the coffee business for decades. He never owned his own shop. Instead, he focused on the behind-the-scenes coffee realm.

So in 2004, he created his own roaster, called Real Coffee Roasters. Four years later, he partnered with Stone Street Coffee Company to spread the business.

Now, his own Mongo’s Coffee roaster sits in the midst of his shop, off to the far right when you enter the door. He’s determined to work with local businesses to help give a Syosset touch to their morning brew as well.

“We’ve gone against big business,” Margulis said. “This is all by hand. I can roast 50 pounds of coffee every 12 minutes.”

Currently, Mongo’s has a staff of about 15 employees. It’s completely family-run, with Margulis and his son, Jake, helping out by greeting customers and answering any and all questions about each drink on the menu. Besides Jake, there’s also Marquis, an expert espresso maker. 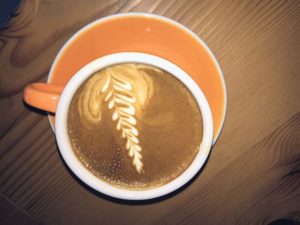 ry different espresso,” Marquis said. “He knows a lot about coffee. I thought I knew a lot. But when I met him, I was like, ‘How does this guy know all of this?’”

For a while, Margulishis  worked for LavAzza, an Italian espresso company. He learned the culture and passion of coffee from a European perspective, rather than the mainstream American way.

Along the way, he’s partnered with multiple people, many of whom are coffee experts. But nothing beats operating his own shop.

The shop has already received requests to hold events for the local community, and Margulis is fully on board. He understands that this can be a great place for the community and the welcoming, intimate atmosphere is exactly what he wants.

And if the name rings a bell, that’s because it’s based off a 1974 movie by Mel Brooks called Blazing Saddles.

“There was a pretty rude scene with beans and a big dude on a horse,” Margulis joked. “Once that came out, I couldn’t shake the nickname. All my friends call me Mongo. Some people don’t even know my real name.”