“Golf is such a mental game,” Rudra, who’s been golfing since she was 8 years old, said. “On the second day of counties, I wasn’t having my best day. I was a little off.” 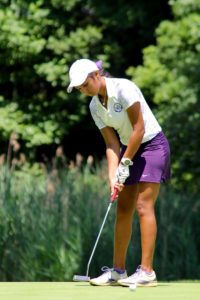 e for an overall score of 154, clinching her second straight title.

“It shows that all of my hard work paid off,” she said. “I was super proud of myself. If you put in the hard work, anyone can do it.”

Rudra started to golf thanks to her family’s love for the game. Her grandmother, parents and her sister all golf.

Naturally, though, she was skeptical because her sister was doing it. Why should she?

“Once my parents took me to the range, I was unable to hit the ball for the first couple of minutes,” Rudra said. “I was so frustrated. I said, ‘Wow, this is a lot harder than I thought.’ I fell in love with the challenge of getting the ball in the air and making contact.”

Besides being a star on the golf course, Rudra is one of Syosset’s top students. Her resume is just as impressive, showing a meticulous work ethic and a high level of determination seen by few her age.

Among Rudra’s accolades in the classroom include being named a National Merit Commended Scholar and an AP Scholar with Distinction. She is also a member of the National Honor Society and Spanish Honor Society, in addition to winning the 2016 Research Literary Award and being part of the All-County band.

It doesn’t end there, either. Rudra is captain of public forum debate team, ex-vice president of presentation for the DECA Business Club, a board member for Children’s Hope India 3 and much more.

In the fall, Rudra will attend Williams College in Massachusetts. There, she will become a member of the Division III women’s golf squad, one of the highest-ranked teams in the division.

“I’ve met the team and love the girls,” she said. “What’s exciting about college golf is there’s more of a team aspect. Yes, you’re competing individually. But at the end of the day, it’s a team event.”