I’m running for Congress because my congressman didn’t just let me down, he made me angry. My congressman is Tom Suozzi and last year, he helped a sexual predator get released from prison.

How do I know? Because I was one of the young people he pressured for sex.

When I was a student, I volunteered on Carolyn McCarthy’s campaign for Congress.
Terry saw me during the campaign, and he got to know me a little. A couple of weeks after we won, Terry invited me to meet with him at his law firm near the Roosevelt Field Mall. This was the first time he propositioned me for sex.

Terry told me that I had a very promising future in local politics, and I was elated when he told me that he wanted to be my mentor, because he knew that my parents weren’t around. That’s when things got a little bit creepy.

After complimenting my intellect and my work ethic, Terry told me that I was “a very handsome young man. And such a good dresser.” I thought these remarks were a little peculiar, but I really wanted the job.

“As your mentor,” he explained, “I want to spend lots of time with you. I want to take you on overnight trips and open doors for you.” And, then, things really went off the rails. “I want to do things with you that you’ve never done before.”

To make matters worse, Terry was a powerful, married man with a wife and kids. He was playing a very dangerous game, and he scared the crap out of me.

I decided to stay away from politics. After graduating from law school, I became a prosecutor in Brooklyn, where I asked to be assigned to the Special Victim’s Bureau. I only agreed to volunteer on another Long Island political campaign because a friend of mine was running for judge, and she asked for my help going door-to-door and collecting signatures.

When I returned to the office one evening, I foolishly let my guard down. I walked into Terry’s office all alone, even though the sun had already set. After a little chit chat, Terry grasped my forearm and told me, “I want to see more of you.” I squirmed away and ran to the door. While I was running to the elevator, Terry stood in the door frame of his office, pointing his finger at me and shouting, “I remember who my friends are, Michael. You ask around.”

Every year or two, I would Google his name, because I knew it was only a matter of time until he was arrested. Sure enough, it finally happened.

In 2017, Terry was arrested and indicted. He owed the government $1.4 million in back taxes.

And then, something unexpected happened. Congressman Suozzi got involved. He wrote a personal letter to the federal judge. Congressman Suozzi described an important friendship going back 30 years, and he assured the judge that Terry was a good person “with deep empathy for others.”

I was thunderstruck that my congressman would write a letter of support for a sexual predator.

Nonetheless, Congressman Suozzi decided to pull strings and get his friend out of jail.

There are only two options:
1. Congressman Suozzi knew his friend was a sexual predator, and he chose to look the other way; or 2. Cong 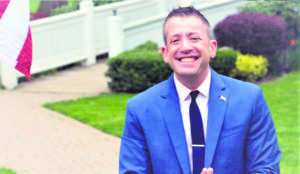 ressman Suozzi was too lazy to pick up the phone and check with law enforcement before writing a letter of support for a convicted felon.
If Suozzi had done his due diligence, he would have spoken with Leslie Gross, the former clerk of the Town of North Hempstead. Gross once went to a neighbor’s house and cautioned the couple that their high school–age son would be in grave danger if he ever went into Terry’s office after dark.

Shortly after Suozzi’s support was made public, Terry was spotted in the local courthouse. He decided to resume practicing law, even though he was a convicted felon and his law license was revoked. Practicing law without a license is a felony, and I was certain that Suozzi would show some leadership and withdraw his letter of support. It never happened. Congressman Suozzi continued to support his friend.

Unlike Suozzi, I don’t have family connections, and I don’t have a sense of entitlement.
I still have school loans, and I’ve never run for office. But, I believe in what I’m doing. I know that New York is the best place in the world—and I know that my childhood role model, Governor Mario Cuomo, would never write a personal letter to a federal judge and try to get his friends released from prison.

If elected, I will become the first 9/11 firefighter elected to Congress and the first openly gay person to represent New York City in Congress. I will also become the only openly gay man holding elective office on Long Island. And I hope to become a role model for all young people.

It’s time to elect leaders who represent the best of New York.

Michael Weinstock is a former prosecutor, a former firefighter and a candidate for Congress. View his video, “Hip Kosher,” at www.weinstockforcongress.com.