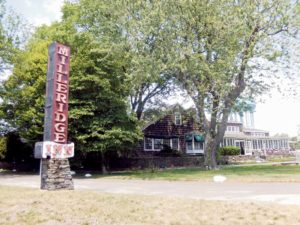 As the clock was ready to strike midnight on May 7, there was a glimmer of hope from concerned Jericho residents that the Town of Oyster Bay town board would listen to their voices. However, that wasn’t the case, as the board unanimously voted in favor of Kimco Realty’s right to have a special-use permit in order to build a three-floor Residence Inn by Marriott in the backyard of Long Island’s oldest restaurant.

The vote was met with plenty of drama as Jericho residents voiced several concerns about the new hotel. More than 300 residents were at the meeting, lobbying the board to hear their concerns.

At the forefront of those concerns are traffic and parking issues that might be caused by the plethora of guests at the hotel just off Routes 106 and 107, as well as possible infringement of privacy for those whose homes are adjacent to the future hotel. However, the homes next to the proposed site of the hotel are already blocked by a fence and several trees.

“There’s a big shopping center next to the Milleridge Inn,” Todd Shapiro, president of the Jericho Chamber of Commerce, said. “You can’t tell me it’s going to create mayhem. It’s going to be respectful. It’s a small hotel, not a big one. You’re not building the Marriott Marquis up there. It basically works for the local community.”

Councilmembers Michele Johnson and Anthony Macagnone recused themselves from the vote.

A petition presented at the meeting featured more than 1,000 signatures against the hotel’s construction.

The Tribune reached out to Kimco Realty for comment about the next steps for the hotel, but did not hear back at the time of publication.

The Marriott will have 93 rooms. The property is part of the Jericho Commons shopping center, which the New Hyde Park-based Kimco group owns. Union leaders argue the project will create dozens of construction jobs, as well as many others once the hotel is built.

“I think as a business owner, you have to look at the whole picture,” Shapiro said. “Having a hotel in an area like Jericho, where you have so many businesses with thousands of employees, there’s a lack of good accommodations. It is a home run for the business community.”

The Milleridge Inn, along with the Milleridge Cottage, sits on the front portion of the property. However, the parking lot is large enough to accompany the hotel that will have less than 100 rooms. Usually, the town code forces property owners to have at least 2,128 parking spaces for a project like this. But the applicant has requested a variance from the town since they will be 552 spots short.

Should the parking situation be insufficient, Kimco might have to create more parking spots on the property’s empty areas. The developer will also plant evergreen trees that are about 10-feet high in order to block any potential cases of people looking onto the properties adjacent from the hotel.

“Our office’s concern is that each proposal is examined in isolation of each other, and no one has studied the effects all three would have on the traffic of Route 106 and Route 107 as a whole,” Gaughran’s letter said. “We want to ensure that the impact of all proposals, as a whole, are examined.”

Though additional traffic is a concern, Shapiro pointed out that the Milleridge makes Thanksgiving dinner for more than 2,000 people each year and traffic is never a concern then.

“You’re telling me no one ever complained about that, but now, they’re complaining that 100 people are going to stay at a hotel and there’s going to be a traffic problem,” Shapiro said. “They have car shows there and different events, and no one’s ever complained before.”

Construction has not begun on the hotel and the back area of the parking lot is currently empty, seldom being utilized.