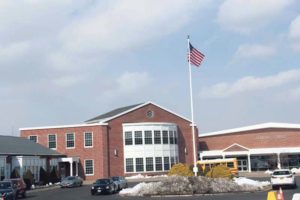 Jericho High School, fresh off being named as one of the highest-ranked in New York by Niche.com, is now part of another exclusive list.

Last week, U.S. News and World Report released its annual “Best High Schools” list. To no surprise, Jericho High School is setting the standard for Long Island institutions.
Nationally, Jericho ranks 134th in the nation and 17th in New York State. It’s the only Long Island school to crack the top-200 in the national ranking.

“We are pleased to be recognized as one of the top high schools in the country,” Jericho School District Superintendent Hank Grishman said. “While we attempt to focus on individual student growth and accomplishments, we are keenly aware of the importance that is placed on such rankings.”

However, Jericho dropped from its 98th-place ranking in the nation from last year.
Part of the reason for the descent is due to U.S. News and World Report’s revised evaluation system. More than 17,000 schools in America were included in the report, compared to 2,700 a year ago.

“Our mission with the ‘Best High Schools’ rankings has always been to educate families about the schools in their district,” Anita Narayan, managing editor of education at U.S. News, said. “By evaluating more schools than ever before, the new edition expands that focus so all communities can see which schools in their area are successfully serving their students, including historically underserved populations.”

The report elaborates on Jericho’s ranking, stating, “The AP participation rate at Jericho Senior High School is 89 percent,” as well as having an impressive 99 percent graduation rate.

Overall, Jericho scored an impressive 99.22/100. More than 82 percent of Jericho High School students are ready for college, according to the report.

“Each school’s score correlates to its national percentile—a school with a score of 70 is in the 70th percentile and ranks higher than 70 percent of schools,” Robert Morse, chief data strategist at U.S. News., said. “Going forward, this methodology will allow for intuitive comparisons of a school’s performance year after year.”