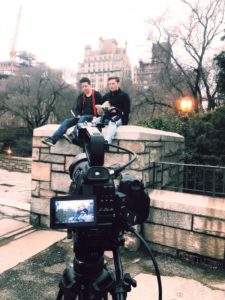 Jordyn Boscia is a self-described “natural-born pizza bagel.” Does it get any better than that?

The Syosset High School alum is currently finishing up her undergraduate work at Marymount Manhattan College. While doing so, she created a side project unlike any other.

“I wasn’t sure what I was doing,” Boscia, who graduates in May, said. “I come from a stage management background. The stage manager during the rehearsal process runs around, tells everyone when they have their break, when rehearsal starts and ends. The typical line of a stage manager at the end of rehearsal is, ‘That’s end of day.’”

And that’s the title of her new web series: End Of Day. To start, this mockumentary-style series, like The Office, will have four episodes, 15 to 20 minutes each, giving an inside look to life in the theater business.

What’s it like to go behind-the-scenes of a production? Where would she start?
The rehearsals.

Once Boscia cooked up the idea, she wanted to bring her inner humor to the show. With a group of about 15 cast members, she created this series to give people a break from the streaming services that offer shows that might not present everyday life.

“We can show people what happens in the rehearsal process is crazy and weird,” she said. “Because of my theater background, there are so many stories that I wish were made up, but they’re true. Personalities are just so out of the box and they’re hilarious. They’re relatable and people want to see more of that. I thought it would be interesting to give an inside look with a cast of characters to show who the people actually are.” 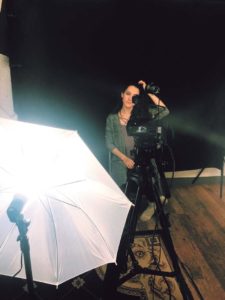 While looking for cast members, Boscia said about 150 people applied to take part in the web series. This isn’t just a random group of college students who put together a few episodes, either.

End Of Day is not only a resume-builder for Boscia, who interns at The Late Show with Stephen Colbert, but it encompasses her passion of content creation and giving people a shot at doing something unique.

“There was absolutely nothing like watching it all come together,” she said. “I sat with our editor and when he showed us the first episode, I started crying. I was so proud that people believed in what we wanted to do as much as I did.”

Once End Of Day is available, Boscia will submit the series to different film festivals.

She hopes to begin filming a second season. However, she will need donations to make that happen. For the first season, she raised about $3,000 to make the project possible.

“The dream is if someone from a network said ‘let’s take something like this on our platform,’” she said. “That would be huge. At the end of the day, we just want the opportunity to keep doing it.”

End Of Day will be released online come June 22. Until then, you can follow their journey on Instagram by following @endofdayseries.