While growing up in Syosset 20 years ago, Joshua Lafazan would frequently head over to Stillwell Fields to participate in different sports. The lad was shocked, though, when he would arrive at the park after the sun had set.

Parents lined up their cars, like a drive-in movie theater, sitting idly by with headlights on so children could practice or even play a full event.

“I remember something as crazy as playing soccer in the fall,” Lafazan said. “I’m proud of my Syosset community and love where I’m from, but our community deserves a better facility than having parents idle their cars. That will always stand out to me.”
Lafazan, Nassau County’s youngest-ever legislator, represents the 18th District. One of his missions when elected was to revitalize Stillwell Fields. Now, he’s cashing in on that promise.

The legislator announced he secured $3 million from Nassau County to completely recreate the area.

“Working with my colleagues and the county executive’s administration, we developed a capital plan to assess infrastructure needs across the county,” Lafazan said. “I don’t think there’s a more glaring need for improvement when it comes to a quality of life facility like a park than Stillwell Fields.”

From mediocre baseball fields that can’t handle rain to a pothole-filled parking lot, poorly-conditioned soccer fields, cracks in the sidewalk and much more, Lafazan said it was time to fix up the fields once and for all.

The revitalization project at Stillwell Fields will include new bathrooms that are in closer proximity to the playing areas, a fresh parking lot with a new configuration to help traffic, a concession stand, baseball fields with protective dugouts, turf soccer fields, as well as the possibility of creating a lacrosse field. 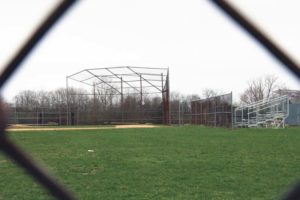 The project does not have a specific timeline. However, Lafazan would like for construction to start in 2020.

“My goal is for Syosset athletes and the community to have a state-of-the-art complex,” Lafazan said. “My goal is to convene what I call the Stillwell Revitalization Task Force. Anything and everything that I do, I want to make sure I have input from the community. It’s crucial that I put together this task force.”

The task force that Lafazan wants to create will consist of community members from little leagues, the fire department, school district and others who care deeply about the fields kids are playing on. Within a day of announcing the revitalization project, more than 200 people applied to be on the task force.

While Lafazan can’t accept every application, he plans to hold multiple “listening sessions,” rather than town halls, to see exactly what the community wants to see at Stillwell Fields.

“I grew up playing on these fields 20 years ago, so it’s personal for me,” he said. “I understand the sense of urgency. This is the only major field that services thousands of kids in Syosset. I have a sense of urgency to get this done.”

For those who want to apply for the Stillwell Revitalization Task Force, contact Lafazan’s office at 516-571-6218 or email him at JLafazan@NassauCountyNY.gov.