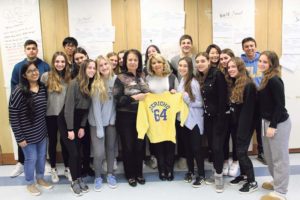 My grandmother, Arlene Toscano, graduated from Jericho High School in 1964. I have such nice memories of riding in the car with her when I was little. She would always point out the house she grew up in, the stores she shopped in and she discussed the fun times she had living in Jericho. But what interested me most was when she talked about her high school years.

Now that I’m a Jericho High School student myself, I wanted to share her high school experiences with others. My grandmother still has her class bucket hat she bought from the school store.

Unlike today, Jericho’s dress code in 1964 was very strict. Female students were only allowed to wear skirts or dresses that went below their knees. If someone’s attire wasn’t appropriate, the assistant principal would scold them by saying, “I can see the back of your knees,” which told the student their attire did not fit the requirements.

Another feature that differentiates Jericho High School in 1964 from 2019 is the school store. The circular structure that still stands in the main lobby by the front circle once served as the school store that sold Jericho Jayhawk pins, sweatshirts and other Jericho paraphernalia. This structure that once was the school store now serves as a storage room.
Toscano’s dearest and happiest memories lie in sporting events, school dances and trips to Washington, D.C. However, a particularly tough day for my grandmother and many other Americans was when President John F. Kennedy was assassinated.

“The announcement came over the loudspeaker that the president had been shot. And it was a very very very emotional day,” she said. “It was quite a day that we will never forget, any of us.”

She recalled how when the students went home on the late bus, the flags were at half staff. A photo of a flag at half staff honors President Kennedy in the 1964 yearbook.
Jericho High School left a big impact on my grandmother. It was four years of her life that she will never forget. She believes that we all should stay close to our friends from high school because it will make a big difference in the rest of our lives.

“I think it’s roots,” she said. “It grounds you. And it makes you understand where you came from, what you learned, who you meet on the way, and what they contributed to you.”

—Julia Penchuk is a student at Jericho High School