It it with great thanks that we remember and honor our dad, brother, uncle and grandfather, Alfred Thomas Michael Givens of East Norwich. We thank him for all his great deeds (and ignore the rest). Al died at age 87 on Saturday, December 8, 2017.

He had been in ill health for several years. Some of you may remember Al jogging or riding his bike on Rte. 25A or Rte. 106 and picking up random treasures along the way. Or maybe you remember the annual Frank Cuccu Memorial Scholarship Race held in Oyster Bay for 10 years that was founded and organized by Al. He was a dedicated sportsman. He was a member of the Long Island Road Runners and completed the New York City Marathon several times. He helped to develop the Great Cow Harbor Run in Northport. He competed in and won the Newsday Speed Skating Championship in the original Madison Square Garden. He was a member of the Grossingers Ice Skating Club, the North Shore Ski Club and the German Bicycle Club.

In the early ‘70s, Al helped to land the approval for amateur cycling to receive endorsements from businesses. The German Bicycle Sport Club was the very first in America with paid endorsement from Rheingold Breweries. When Al was in his 20s, he served as a U.S. Army officer in the Corps of Engineers in Japan during the Korean War.

Al was a graduate of St. John’s and Fordham universities. He was a certified public accountant and a member of the Knights of Columbus Council #1206 in Oyster Bay. On the homefront, Al was quite the handyman when it came to his boat (Janie B.), his house, his bicycles and his fruit salad. We are sad to share that he is gone now, but we are happy to remember so much that was good.

Al is survived by his wife of 65 years, Janie; brothers Vincent and Raymond and their spouses and children; children Alfred, Timothy, Janine, Deirdre and Colleen; 10 grandchildren and two great-grandchildren. We all will miss Al’s quiet, generous and competitive spirit. There will be a memorial service for Al Givens on Jan. 20 at St. Dominic’s Chapel at 3 p.m. The chapel is located at 93 Anstice St. in Oyster Bay. A private burial service will be held at St. Peter’s Cemetery in Staten Island, where he will be interred with his mother, father and brother Matthew. You may make a donation to the Frank Cuccu Memorial Scholarship and mail it to Oyster Bay High School, 150 E. Main St., Oyster Bay, NY 11771. 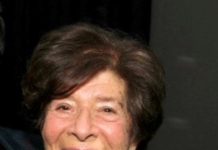