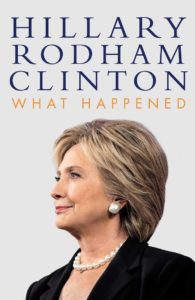 The events surrounding the 2016 presidential election left most voters on the political spectrum scratching their heads, whether veiled by a red MAGA hat or not, but what’s perhaps more confusing is why nearly a year later, Hillary Clinton is still attempting to explain what caused her defeat, this time casting blame on former primary opponent, Bernie Sanders.

“But he isn’t a Democrat...He didn’t get into the race to make sure a Democrat won the White House, he got in to disrupt the Democratic Party,” reads a leaked excerpt from her new tell-all book entitled What Happened.

What Clinton fails to realize is that disruption is what most voters, whether liberal or conservative, wanted all along. Better yet, it’s what they needed. After years of waning trust in the dual party system and the politicians spearheading the two camps, what voters need is a president who pushes for the betterment of all people, not just their respective party and the people who belong to it. Instead, they got Donald Trump.

Clinton says Sanders’ actions and rhetoric caused “lasting damage” and while that may be partly true, with Trump’s win dealing a devastating blow to the Democratic Party, what’s more damaging is her constant depiction of the Democratic Party as the beacon of light, the saving grace from the evil Republican machine, only perpetrating further partisanship and an us-versus-them mentality. In the end, it’s that kind of language that causes irreparable damage, drawing enemy lines where they should not be, and making her no better than the blame-shifting President currently in office.

In the book, she describes her pride in being part of the Democratic Party, touting its accomplishments like “Social Security under Roosevelt; Medicare and Medicaid under Johnson” and so on. While the Democratic Party has no doubt been responsible for some of the most progressive legislative landmarks in American history, she only points out the party’s shining moments, neglecting the fact that the reigning party is only as good as the person in charge of it, whether a Democrat, Republican or anything in between.

She can peg Sanders as the one singlehandedly responsible from the demise of the Democratic Party and scoff at his departure from tradition, but maybe what this nation needs is a leader, even if he or she “isn’t a Democrat.”