Runners and walkers from Syosset, Woodbury, Jericho and all over Long Island are cordially invited to sign up for the 26th annual David Lerner Associates Long Island Police Appreciation Run, to be held on Thursday, June 8, 2017 at Eisenhower Park, with the starting horn sounding at 7 p.m.

The key sponsor of this event will once again be David Lerner Associates, the Long Island based investment securities and financial management firm that has been a supporter of the run for more than two decades.

The entry fee $25 for those who enter in advance (only $22 for Greater Long Island Running Club members) and $30 for those who registern on the evening of the run. All high school student and younger entrants who preregister are entitled to take a 50 percent discount.

Runners from Syosset, Jericho and Woodbury have always played a prominent role in this run. Among the finishers in the 2016 edition were 89-year-old Bert Jablon, who was the oldest finisher in the run, and award winners Pamela Lee of Syosset and Donna Rosen of Jericho.

Everyone owes a tremendous debt to the outstanding men and women who make up Long Island’s police forces. They truly are Long Island’s finest, and the Greater Long Island Running Club is pleased to be able to gather people from all over the New York Metropolitan area for this event.

Online registration is now open at www.glirc.org. Hard copy entry forms can be downloaded from the website. To volunteer, call Mindy at 516-359-9409 or email her at mindyruns@aol.com. 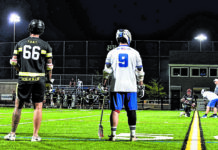