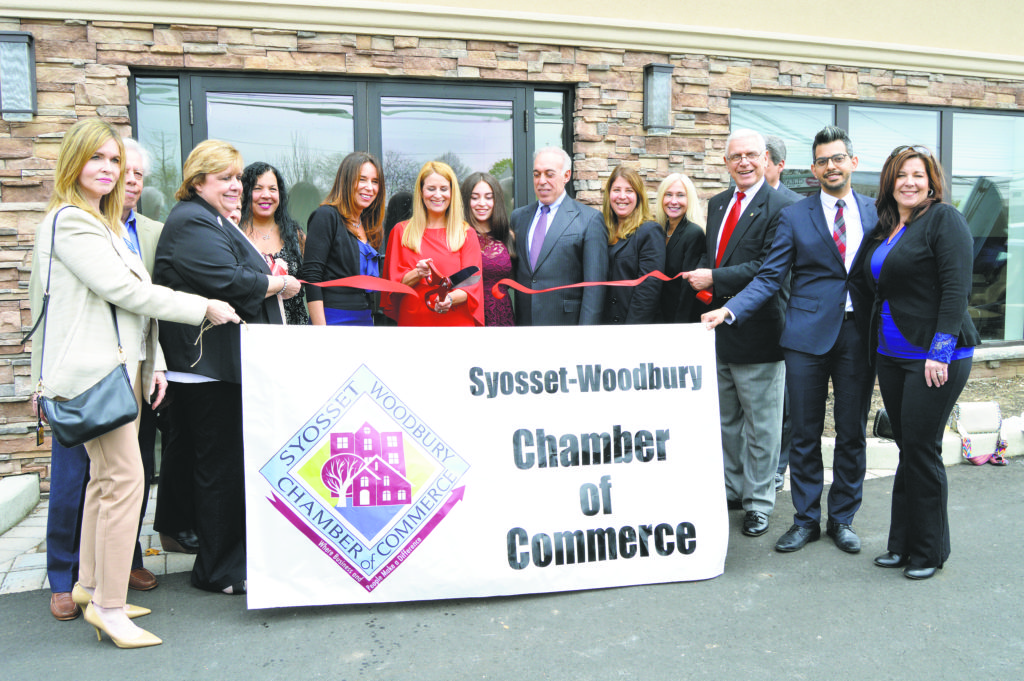 “I want to thank everyone for joining us today in an event that still doesn’t seem real to me,” said Homes By Mara founder Mara Navaretta, addressing a crowd consisting of friends, family members, local dignitaries, realtors and residents drawn to the festivities upon passing. She made special note of her appreciation for her husband John, daughter Sabrina and sister Erica, who have been her greatest supporters.

“We began Homes By Mara in 2010 to create a company that puts the consumers first,” she continued. “Seven years later, we stand here with our company name on a building that we own.”

The grand opening and ribbon cutting ceremony, held Thursday, April 27, was a celebration of the expansion of the company’s headquarters, conveniently located at 30 Berry Hill Rd. in Syosset. Since the company’s inception six years ago, the corner agency has doubled in size, growth and operation.

The agency, which has grown from five to 50 agents, is dedicated to aiding customers, whether previous home-owners or new buyers, throughout the process, paying special attention not only the act of locating an ideal house, but also to the emotionality of it all.

“What I wanted to provide my clients with was the type of service they’ve never had from realtors,” said Navaretta, who began a career in real estate in 1997. “We make sure that they are very well cared for and that they can always reach me. Most people, even though they may be extremely successful in business, don’t understand how emotional it is both to buy and to sell.”

The ceremony commenced outside the building with opening statements by a deacon, who recited a prayer and wished great success for Navaretta and the future of her company.
On behalf of Town of Oyster Bay Supervisor Joseph Saladino, Councilwoman Rebecca Alesia then took to the stage.

“I think what you have done as a woman, as a parent and as a business owner are absolutely flawlessly inspirational to each and every one of us in this room,” said Alesia, directly addressing Navaretta, a longtime friend of hers. “In this market and in this neighborhood, we are inundated with corporate franchise real estate companies. Mara is a local gal who lives here, owns a business here and is making it happen independently, and I am so proud to have her as a town resident and business owner.”

Newly inducted Syosset-Woodbury Chamber of Commerce President Charo Ezdrin then expressed her desire to better acquaint herself with Navaretta and personally welcome her to the ever-expanding chamber.

“I am honored to be here as a business owner, as president of the chamber of commerce, and to welcome you during this fantastic grand opening,” said Ezdrin, who recently opened her own law firm in the community. “This is why I love Syosset. I see someone like Mara, and the extraordinary growth she has had, and I can’t congratulate her enough.”

In alignment with Homes By Mara’s reputation for giving back to the community through charitable contributions, Navaretta presented a surprise $1,000 check donation to the Children’s Brain Tumor Foundation (CBTF), a nonprofit organization that she has worked with on a number of occasions. Further funds for CBTF were collected via a silent auction later in the day during the dinner reception.

Before moving on to the official ribbon cutting, Sabrina approached the stage for a surprise champagne toast and short speech, which articulated her pride in her mother and admiration toward her as both a successful entrepreneur and a parent.

Ezdrin and other active members of the Syosset Woodbury Chamber of Commerce Board of Trustees then organized behind a banner and ceremonial red ribbon, handing the scissors to Navaretta to do the honors.

The beaming business owner once again thanked all those in attendance, vowing to “celebrate every single year.”

For more information about Homes By Mara, visit www.homesbymara.com.