Kimberly Costa of South Woods Middle School has been named a “Distinguished Teacher of 2017” by the Harvard Club of Long Island. 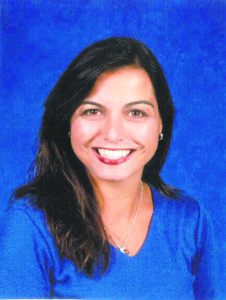 “This award honors teachers who transform lives,” explained Dr. Judith Esterquest, Harvard Club of Long Island chair of the Distinguished Teacher Selection Committee. “Devoted teachers like Ms. Costa offer Long Island students deep expertise, extraordinary talents, and countless hours of attention. By capturing the minds and imaginations of our children and preparing them for challenges that were unknown even a few decades ago, these teachers shape the future of our country.”

Costa will be honored at the Harvard Club of Long Island’s annual University Relations Luncheon on April 30, along with 11 other teachers from across Long Island.
She won the Pulitzer Prize in History in 2009 for The Hemingses of Monticello: An American Family (W.W. Norton, 2009) and most recently published (with Peter S. Onuf) Most Blessed of the Patriarchs: Thomas Jefferson and the Empire of the Imagination (Liveright Publishing, 2016).

Costa has been teaching for 20 years and currently teaches eighth-grade English and sixth-grade English as a new language/English language arts (ENL/ELA) at South Woods Middle School. She is also the advisor of the school’s Book Club. In October 2001, she received the New York State English Council Educator of Excellence Award for demonstrating exemplary teaching and leadership in English Language Arts education.

“I will often chat with students and ask what they are reading and why, and more often than not, they reveal that Ms. Costa recommended that particular book,” said South Woods Middle School Principal Michelle Burget. “So many students who claim to not enjoy reading or writing walk away from Ms. Costa’s class having fallen in love.”

At the ceremony on April 30, the Harvard Club of Long Island will announce the Distinguished Teacher of 2017 who will also receive a scholarship for a “Harvard experience” at the Harvard University campus in Cambridge, MA.

This year’s 12 Distinguished Teacher Award winners were nominated by current Harvard undergraduates and then selected by Harvard Club of Long Island board members. Previous winners of this award in the Syosset Central School District include Susan Dowd in 2016, Brian Belanger and Linda Stollow in 2015, Allison Noonan in 2014, Stephen Wolfson in 2006, and Arthur Kalish in 2005.