Jericho High School Celebrates Diversity
Students of Jericho High School celebrated diverse cultures of the world during Diversity Day. The day consisted of various acts and dances, including a performance by the French Honor Society and a demonstration of Chinese yo-yo.
—Jericho Schools

Students Of The Year Campaign Kicks Off
Twenty high school students were honored at the inaugural Students of the Year Long Island Kickoff. These students are working as single candidates or as a core team to support the mission of The Leukemia & Lymphoma Society (LLS), which is to raise funds for blood cancer research and cures.

Congratulations to the following Students of the Year candidates from the area: Austin Coven, Sophia Kim and Jean Yoo of Jericho High School, Jordan Heller and Zachary Luchs of Syosset High School, and Vanessa Shapiro of Fusion Academy of Woodbury.
The candidate or team who raises the most money at the end of the six weeks (Feb. 9-March 23) is named Student(s) of the Year. The winner will receive a $2,500 scholarship. In addition, three students will be selected to receive a Citizenship Scholarship Award of $500 each based on their campaign’s commitment to community, leadership and the LLS mission. The winners will be announced at the Awards Celebration on March 23.
— The Leukemia & Lymphoma Society, Long Island Chapter 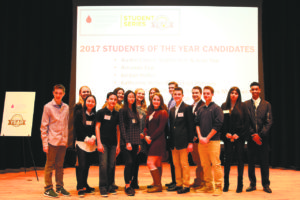 Syosset Students Advance to National Business Plan Competition
Teen entrepreneurs from 72 local high schools competed in the seventh annual Long Island Virtual Enterprises (LIVE) Business Plan Competition. Ten of those teams, one of which being Alternate Reality Entertainment and Flip-Chip of Syosset High School, will advance to the semi-finals next month. Student business leaders from across Long Island won the top spots during an event held at Farmingdale State College and move on to compete at semi-finals hosted by American Portfolios in Holbrook, next month.
—Nassau BOCES

Jericho Middle School Participates In Art Contest
The Jericho Middle School PTSA recently announced that the Reflections Art Contest received more than 40 submissions this year. The 2016-2017 theme was “What is Your Story?”
Four students were selected as Jericho Middle School finalists. In the visual arts category, the finalists are Judy Zhou (The Path) and Clare Chen (My Two Worlds). In the photography category, the finalists are Madison Grady (The Footsteps of My Life) and Jyotleen Dewal (City Perspectives). Their exceptional artwork has moved on to the PTSA’s regional level of the Reflections Contest.

All of the entrants received an invitation to an award and pizza luncheon, where Principal Dr. Gately, Assistant Principal Mr. Weiner and members of the PTSA’s Executive Committee presented students with certificates and congratulated them on their submissions.
—Esther Reich and Kim Sternick