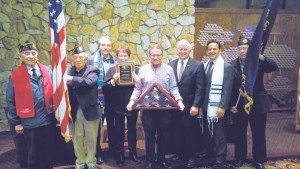 Temple Or Elohim in Jericho held a very special celebration of Veterans Day, a holiday that is too often ignored. On Friday, Nov. 11, the temple took the time to honor Ted Snyder, a much decorated World War II combat veteran and one of Temple Or Elohim’s first members, who passed away earlier this year at the age of 94 and was buried at Arlington National Cemetery.

With members of Snyder’s family in attendance, the service featured two guest speakers and an honor guard from the local post of the Jewish War Veterans, as well as personal memories of Snyder by Rabbi Harvey Abramowitz.

Assemblyman Charles Lavine presented an American flag, which had been flown over the U.S. Capitol, in recognition of Snyder’s outstanding service to the country and community. The flag and an honorial plaque presented by the Men’s Club will be placed in a prominent location in the temple.

In his remarks, Lavine spoke of the participation of Jewish soldiers in all the wars fought by this country, dating back to the French and Indian War, and added that Snyder was one of more than 550,000 Jewish men and women who served in World War II.

The assemblyman was followed by fellow veteran Jack Hayne, who gave a heartfelt account of Snyder’s tireless efforts in community service and his uncanny ability to persuade others to get involved in whatever way they could. The service concluded with Cantor David Katz leading the singing of “God Bless America.” Snyder will always be remembered, not only for his service to the country, community and temple, but also for his wit and enjoyment of life. Whether drilling gourds for Sukkot, helping with temple events and sharing stories of the temple’s early days, Snyder was an integral part of the history of Temple Or Elohim.