Jericho High School’s French Honor Society is going beyond just celebrating French culture and language by giving back to the community in the wake of the coming holidays.
Spearheaded by junior Matthew Kauffman, and assisted by French teacher and French National Honor Society Adviser Caroline Kennedy, the group of talented young students gathered on Friday, Dec. 9, to make bagged lunches for the Family Service League of Long Island.

“It’s all about being thankful for what you have,” said Kauffman. “Sometimes not everyone is appreciative, so this is my way of showing what I’m thankful for and giving back to people who aren’t in the best circumstances. It’s the quintessential holiday theme.”

The Family Service League of Long Island, a Huntington-based social service agency that has been operating since 1926, aims to provide “both physical and emotional aid to Long Island’s most vulnerable citizens,” according to its website. The collection of lunches to disperse to children who may struggle to afford school lunch is just one of the many ways that the league supports local families, especially during the holiday season.

“We give seniors companionship and purpose, we provide hope and protection for the homeless, we allay the fears and desperation of young adults consumed by addiction or mental illness, and we offer nourishment and shelter to the working poor facing insurmountable financial burdens,” says the Family Service League of Long Island’s website. “Most importantly, we strive to keep vulnerable families strong and supported.”

This marks the second consecutive year that Kauffman has organized the service event in conjunction with the Family Service League of Long Island, a tradition initiated by his older sister, a former Jericho High School student.

In preparation for the process of putting together adequate lunches for those less fortunate, Kauffman and the French Honor Society students accepted donations from other students and faculty, as well as outside local businesses such as Christina’s Epicure, ShopRite and Stop & Shop.

Last year, the group was successful in bagging a total of 200 lunches, but this year’s body of students had their sights set on surpassing their previous number. With steadfast determination, the dozens of students who participated were able to complete more than 300 bags.

“It sounds cheesy, but we’re making a difference in someone else’s life,” said Kauffman. “These are going to homeless children who don’t really know where their next meal is coming from, and that’s kind of unimaginable to me and so many of the people here.” 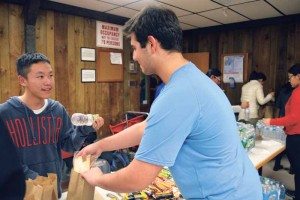 Kauffman, who has been able to initiate and rally support for this project largely on his own, has hopes that this becomes a Jericho High School French Honor Society tradition that will continue following his departure from the school. Though he has one year left to lead his classmates, he is beginning to consider how he will ensure that the bagged lunch drive will remain and thrive in the coming years.

“Next year, I’m going to try to get someone to run the event with me so I could pass it on to them, and hopefully they teach someone else the following year so it can keep going,” he said.

Aside from this spirited service project, the French Honor Society participates in a number of other community-oriented events throughout the year. Most recently, the group made approximately 200 teddy bears that will be sent to a local children’s hospital. In the coming year, they will be going to a retirement home to teach elders French and sing to them, and will also be constructing notes to send overseas to veterans.

“We want to impart on the students that it’s important to think beyond yourself and to think of others who may need help in the community,” said Kennedy. “It’s such a good feeling to know that they love doing it, and I love watching them and seeing the excitement in their faces.”