The Nutcracker is the quintessential mark of the start of the holiday season, but one Jericho Middle School student isn’t just watching the show, she’s a part of it. Erica Hooshi, an eighth-grader and avid dancer, is set to star as the leading role in a production of the famed ballet at Finley Middle School’s Wunsch Performing Arts Center in Glen Cove on Sunday, Dec. 11.

“I’m looking forward to performing,” said Erica Hooshi, a pupil of Glen Dance Studio. “I’m always excited for upcoming performances and competitions because you gain experience with each one.” 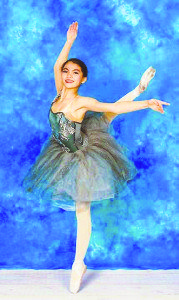 Erica Hooshi began dancing when she was eight-years-old and has since been in love with the art. Her talents have exposed her to many unique experiences and adventures, performing during a Harlem Globetrotters game and on a cruise ship and in Disney World to name a few. She has earned national dance scholarships, and has placed first for solo, duet and group performances on a number of occasions.

The young dancer is no stranger to The Nutcracker, as she once performed in a production of the show with her previous company, Lynch Ballet School in Huntington. When auditioning for this role, she channeled her prior experience and inner confidence, earning her the leading role this time around.

Erica Hooshi has now been with Glen Dance Studio for about four years, and intends to stick with the program until she graduates and continues on in her dance career. Glen Dance Studio, located in Old Brookville, has a reputation for its sportsmanship and active community service, and Erica Hooshi is especially appreciative of the high caliber level training and challenging nature of the school.

While ambitious when it comes to dance, Erica Hooshi is also highly motivated in most other aspects of her life. Aside from attending middle school and dancing school, she participates in activities such as fencing and volleyball. Her interests range from athletics, to poetry, to choreography, and she seamlessly manages to devote time to each of her pursuits. 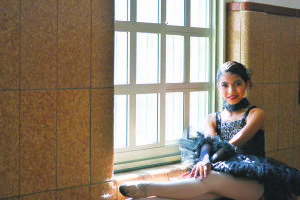 “It always seems like she has too much to do so we keep asking her to choose one thing or at least a few things to focus on but she refuses to,” said mother Vivian Hooshi. “She’s very motivated, so whatever she enjoys and loves I will always support.”

The driven 13 year old already has her sights set on her future, hoping to someday be an orthodontist and also a dance teacher. Her years of discipline as a dancer will surely be a contributing factor to her grand ambitions.

“I always say that I’ve been dancing for so long and I love it so much. I have such a big passion for it, why would i want to quit?,” said Erica Hooshi. “It gets hard with my busy schedule and people tell me I should choose between a few things, but if you can do well in everything, why choose?”

This mentality has been the driving force behind Erica Hooshi’s success for much of her life. Her parents have no doubt that when this rising star sets her mind to something, she is more than equipped to excel in it.

For more information about Glen Dance Studio, visit www.glendancestudio.com. To see a clip of one of Erica’s previous solo numbers, click here.