For fans of Mediterranean cuisine, the distinction between Greek, Israeli and Turkish can make all the difference, but luckily diners at Wild Fig of Syosset don’t have to choose. The restaurant presents a menu with a fusion of popular regional dishes, from gyros, to mezzes, to moussaka and more.

“We carry all different types of Mediterranean food, it’s truly a mixture,” said manager Ali Ozkovalak. “Our specialty is that we make everything from scratch, we have our own flatbread grill and we use only the freshest ingredients.”

Though slightly different in origin, the menu items blend seamlessly to create a comprehensive list of delectable entrees. Upon ordering, guests are presented with warm pita flatbread and tzatziki, a Greek cucumber yogurt sauce often paired with bread or grilled meats. Though difficult to resist eating the whole pita at once, it is important to remember to save room for the generous portions on their way.

When it comes to appetizers, customers can enjoy chickpea-based small plates such as hummus or falafel. A fan favorite tends to be the babaganoush, a roasted eggplant and tahini dip served with flatbread.

Moving down the menu, there’s soups, salads, pita wraps and signature sandwiches. Customers rave about the customizable salads, which start with a base of either a Greek, Mediterranean, Shepherd’s, pomegranate, white bean or arugula salad, finished with a choice of toppings such as calamari, grilled chicken, shrimp or salmon. 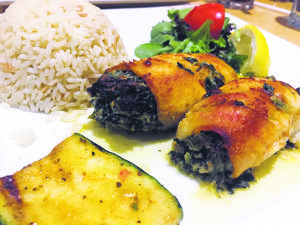 Next up are the entrees. Some of the most commonly ordered meals are the classic skirt steak, grilled lamb chops, spinach and feta flounder and the planked salmon with crabmeat. For the indecisive eaters, there are certain trio options that provide a bit of each type of protein to make ordering a little simpler. All regular and specialty entrees are served with rice pilaf and a choice of Greek salad or soup.

No dinner is complete without at least a bite of dessert. The restaurant is known for its baklava, a sweet layered pastry originating from the former Ottoman Empire. Wild Fig presents three varieties of baklava—pistachio, walnut and chocolate almond. Other post-dinner treats include figs with walnuts, oven baked rice pudding, chocolate lava cake or a dessert sampler encompassing all of the above.

This creative medley of authentic food has been the driving force behind the eatery’s success for the past eight years. The staff’s devotion to consumer satisfaction is reflected by the restaurant’s many accolades.

“The customers love the consistency when it comes to quality, which keeps them coming back,” said Ozkovalak.

Wild Fig’s locations in Syosset and Garden City have gained such a steady influx of loyal customers that a third location was recently opened in Roslyn. Ozkovalak describes this new

Wild Fig as a “Chipotle-like” express-style restaurant. It is not unlikely that Wild Fig may expand its reach and open locations in more towns in the near future.
For more information www.wildfigonline.com.