While most students are just beginning to readjust to the new school year, Robby Meehan of Rockville Center is nearing the end of his classes and preparing for graduation. His unusual semester, which typically runs from April to October, allows him time off during the winter months rather than having a traditional summer vacation in order to pursue his true passion: snowboarding.

“It’s really the only school I could go to that would allow me to do this,” said Robby Meehan regarding his ability to plan his classes around his snowboarding commitments. “I just got back from Australia, and in October I’m going to be leaving for a competition in Austria.”

His flexible schedule is made possible through the innovative approach to learning at Fusion Academy in Woodbury. Unlike typical middle and high schools, Fusion Academy allows students enrolled in grades six through 12 to get one-one-one mentoring for each subject and customize their schedules with a mix of core and elective classes in a way that works best for them.

“It’s a more holistic way of teaching,” said Dana Youmans, director of admissions and outreach at Fusion Academy. “Teachers aren’t just teachers, they’re also mentors. We model our approach for each student on an individual basis.”

This emphasis on individuality allows students to learn at a pace they feel most comfortable with, making the school an ideal institution for children of varying needs and circumstances.
“Every kid has a story,” added Youmans. “If a student is having trouble, they can hit the brakes and slow it down. Some kids may have been held back in a large classroom setting so here they can move at an accelerated pace.”

Fusion Academy, which was founded about 30 years ago in California, currently has campuses nationwide. The Woodbury location, just one of the five in New York, opened its doors in 2012 and has since been molding the minds of students who were not reaching their full potential in their previous middle and high schools.

No matter the location, every accredited campus adheres to the same guidelines. This includes a no homework policy, a four-day school week and a grading system based on mastery of a subject, which varies from student to student. Robby Meehan’s mother, Jo-Ann Meehan, had nothing but high praise for the school that she said has provided a wonderful learning experience for her son, who has been enrolled in Fusion Academy since the opening of the Woodbury location. 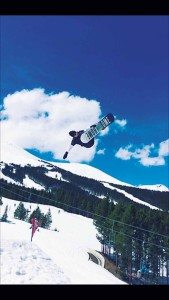 “His communication skills have certainly been enhanced by it,” said Jo-Ann Meehan. “He’s been able to travel and learn about different cultures because of his flexible schedule. It’s just a totally different way to educate but it’s been amazing for Robby.”

In an effort to maximize his availability to travel and snowboard, Robby Meehan has doubled up on his course load so that he could complete the necessary subjects within as little time as possible.

“You have to be self-motivated and Robby has really embraced it,” said Jo-Ann Meehan about her son’s work ethic. “I never have to ask ‘is your homework done?’ There’s no pressure or arguing with teachers. The cohesiveness of our family has just been so much richer because of it.”

Upon graduating, Robby Meehan looks forward to having the time off to focus on snowboarding, partaking in competitions and improving his film and videography skills. When asked if he would change anything about his years at Fusion Academy, he replied, “Not at all. It’s been really amazing. I’ve established an insane foundation for education.”