For one graduate of Syosset High School, the old saying “do what you love and success will follow” holds more truth than she could have ever imagined. Ally Melendez, a current senior at the State University of New York at Oneonta, has just landed a job as a TV personality and video jockey for IndiMusic TV, a WLNY series that aims to highlight top independent artists.

“I’m so excited to be a part of such an incredible show,” said Melendez. “I can’t wait to get to know the whole staff, see production behind the scenes and really familiarize myself with these independent artists and genres.”

Melendez has had an active interest in the world of broadcast media and television production since her high school days, but was unsure of how to break into the industry. Upon learning about the relevant programs and training available at Oneonta, she knew the school would be the perfect fit to propel her toward the career of her dreams.

Since her first year, Melendez has been a recognizable face on campus through her involvement with several locally broadcast, student-produced TV shows including The Oneonta Movie Show, O Entertainment and O-Code. The mass communications major looks forward to her senior year, during which she will have more time to focus on her already promising future. 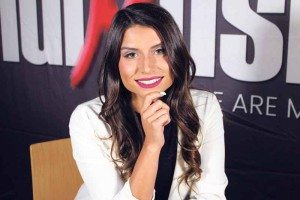 “I’m the type of person who wants to excel at everything I do,” said Melendez. “The past few years have been tough because I overloaded myself with credits so that by the time I reached my senior year I would be able to focus on my career more.”

She did not imagine that her ambition and hard work during an internship with Donna Drake of WLNY would lead her to a prominent role on television before graduating. After doing a segment on Drake’s show Live It Up and meeting the owners of the studio, Melendez was approached by Chris Patti, founder of IndiMusic TV, who suggested that she audition for a hosting position on the show.

“I was so taken back at first because I’m still in school, but it was nice of him to see something in me,” said Melendez recalling the opportunity that initially seemed out of her reach. “I auditioned and they called me back the day after offering me the job. I was absolutely ecstatic.”

Melendez’s role as a host and video jockey will require her to review the highest rated music videos according to online votes for the show’s Top 21 Countdown. This segment highlights the most well-liked independent artists and videos that typically get overlooked by mainstream media. IndiMusic TV says it is currently the no. 1 worldwide independent music video TV channel and social network, boasting a commitment to providing a way for people to discover artists, bands and genres that would not normally be heard on the radio or seen on television.

“The show puts people and artists in the limelight, which isn’t always typical for them,” said Melendez.

According to Melendez, support amongst members of her community and her past high school teachers has been outstanding. She is appreciative of their interest in her achievements and expressions of pride. Some supporters have even taken to Facebook to share the news of Melendez’s recent job acquisition.

“They were like family to me at the time, so knowing that they’re still supportive and still here for me is exciting,” Melendez added.

As for the future, Melendez’s only immediate plans are to learn as much as she can from the show and its dedicated staff. She intends to give 110 percent and make the most of her time there. Upon graduation, she would like to have a more active involvement with the company and participate in their events whenever possible.

“As for now I really want to focus on growing with the company and meeting more great people like them,” said Melendez. “Everyone there is so smart and so driven and they’ve really made me feel like part of the team already.”