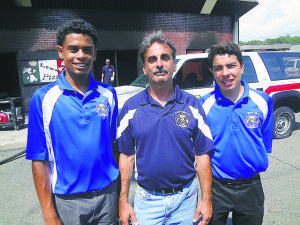 With her father being a chief in the Syosset Fire Department—and her mother volunteering as well—firefighting is clearly in 14-year-old Emilie Siering’s blood. But while not sure if her future leads to service as a first responder like her parents, Siering nonetheless said that she has enjoyed her time at the Nassau County Fire Services Academy in Old Bethpage, even if the training bordered on rigorous at times due to the intense late July heat.

“My mom wanted me to check the juniors out and I thought it was a pretty cool thing to do,” she said. “We’ve done a lot of very intense training and working outside, especially in the heavy firefighting gear, is very difficult on a hot day like this. It’s rough, but it’s also a lot of fun because I got to break down a prop door by myself. I’m not sure if I want to get involved with firefighting when I get older, but it’s an option and I certainly think it’s very interesting.”
At Fire Service Academy in Old Bethpage, the next generation of brave young firefighters were recently put through the ringer in order to give them a taste of the hardships—and pride—that await in their future careers as first responders.

The Nassau County Junior Firefighters Association boasts a membership of more than 1,200 and 45 of them were recently given the chance to participate in the opportunity of a lifetime—training as their real-life heroes do at one of the most respected firefighter training facilities in the United States. Jerry Presta of East Norwich, chairman of the association, said it was formed to bring together individual fire departments across Nassau on a regular basis.
“Junior Firefighters are basically youth groups from different fire departments that come together to learn how to be a firefighter,” he said. “Eleven years ago we decided to create something to bring all of these kids together, so we formed the Nassau County Junior Firefighter Association in 2006. We come together five, six, seven times a year at firehouses throughout the county and have speakers on fire-related things like job opportunities and we hold training camps.”

The annual training camps, held at the Fire Service Academy in Old Bethpage—a highly-regarded, 2.4 acre state-of-the-art facility used to train volunteers for all of Nassau County’s 71 fire departments—are in their second year of existence and have proven wildly successful with the juniors.

“I approached the academy about five years ago and they were very receptive. We set up a program and curriculum, which took about two years to put together,” he said. “This is the second year that we’ve held the camp here, in partnership with the Boy Scouts of America. We had two squads last year of 15 kids a piece for a total of 30 and it was so successful that this year we added an extra squad, for a total of 45 kids. The camp is five days long—a solid 40 hours—the kids need to commit to it.”

While at the camp, Presta said that the Junior Firefighters undergo rigorous training using hands-on, real, working gear and facing real smoke and fire designed to familiarize them with nearly every aspect of being a professional firefighter in the field.

Due to its continued success, the program may be expanded further in upcoming years, with more exercises and drills.

Presta noted that they may be getting some foreign exchange student firefighters in the near future, as certain exercises at this year’s camp were streamed live via Internet to young firefighters in Germany.

In addition, the academy has been fielding inquiries from fire departments across the U.S. as well, since there are very few other places in the country that actually offer programs like this.

To find out more about the Nassau County Junior Firefighters Association, visit www.ncjfa.org.