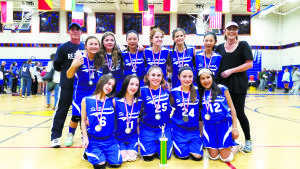 Congratulations are due for St. Edward’s CYO sixth-grade girls volleyball team, as the squad capped off a remarkable season by winning the 2016 league championship on May 17 at Kellenberg High School with a perfect record of 14-0.

Coached by local resident Charlie Santoro, the team won an impressive 41 of the 42 matches during the 14 games played. Led by a couple of returning stars and some promising newcomers, the team improved every game and ultimately wrestled the championship away from a very competitive St. Mary’s team. These girls deserve to be commended for their dedication and hard work—their commitment to excellence has not gone unnoticed.