The definitive account of the sinking of an American merchant ship six months before Pearl Harbor, which resulted in a speech by President Franklin D. Roosevelt and created a nation-wide controversy, has been written by Jericho resident George Haber.

The book, Outrageous and Indefensible: The Sinking of the SS Robin Moor, was published by the American Merchant Marine Museum in Kings Point in connection with a year-long exhibit on the sinking and its aftermath.

At the time of the sinking of the SS Robin Moor, America was neutral in the war that was raging in Europe. Despite this fact and the lack of desire of Adolf Hitler to provoke the United States at a time when Hitler was planning his invasion of Russia, a German U-boat torpedoed the defenseless merchant ship off the west coast of Africa. 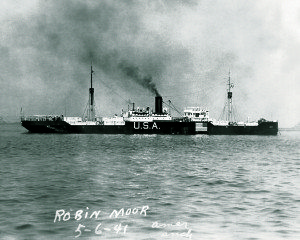 Remarkably, no lives were lost in the incident because the U-boat captain allowed the crew and passengers to board lifeboats and drift away from the ship, which was subsequently blown up and left to sink into the South Atlantic Ocean.

The sinking created a national debate between isolationists and interventionists over whether the incident warranted a U.S. military action against Germany.

At a May 20 reception at the Merchant Marine Museum, marking an exhibit on the 75th anniversary of the sinking, Haber said, “In histories of World War II, the sinking of the Robin Moor rarely rates more than a footnote,” mainly because no lives were lost.
He said that FDR called the sinking “outrageous and indefensible” and demanded that Germany pay for the loss of the ship, its cargo and the possessions of the crew and passengers.

For months until the Japanese attack on Pearl Harbor turned the United States into an active participant in the war, congressmen, senators, editorial writers and the general public debated over what action the U.S. should take.

The exhibit at the Merchant Marine Museum documents the saga of the Robin Moor and personalizes the story of the aftermath of the ship’s sinking. The book and exhibit discuss the fate of the crew and passengers who took to four lifeboats and spent weeks adrift until they were rescued by two passing freighters and taken to Brazil and South Africa.
The Museum’s interim director, Dr. Josh Smith, who teaches at the U.S. Merchant Marine Academy in Kings Point, said that the 100-page book is “without doubt, the most comprehensive study of the Robin Moor incident to date.” 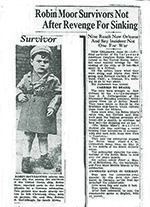 Haber is former editor of Surveyor magazine of the American Bureau of Shipping, an international maritime engineering society that sets standards for the design and construction of merchant ships. He also served as manager of external communications for the defense contractor Sperry division of Sperry Corporation. A former head of the business and technical communications program at the New York Institute of Technology, he currently serves as an adjunct at the Vaughn College of Aeronautics and Technology in Queens.