In Syosset, More Than A Gym is living up to its name by giving children struggling with a wide array of disabilities a chance to not only overcome what ails them, but succeed in life as well.

Located at 40 Oak Drive, More Than A Gym is a bright, cheery facility adorned with mats, monkey bars, hammocks, climbing ropes and more, focusing on a number of out-of-the-ordinary issues facing youngsters that have been increasing in number in recent years, according to owner and physical therapist Dr. Yelena Palazzo. 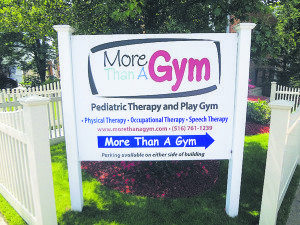 “It’s a place where kids can come and get social, motor, sensory, speech and communication therapy in a group setting or individually,” she said. “We have a lot of kids who have what is known as sensory processing disorder, which is when a child can’t tune out all of the background things that are going on that you are and I are able to. Everything becomes super overwhelming to them and they’re unable to focus on things. So, they come here to get the sensory experience that will bring them to a state where they are just right and they can focus and function.”

Palazzo, a Plainview resident, has dedicated her life to helping disabled children be all that they can be and there’s a very good reason why she was drawn to working in such a challenging field—originally born in the Ukraine back while it was still the USSR, her own childhood was defined by the same adversity that she helps youngsters overcome now as an adult.

“I was born with my umbilical cord wrapped around my neck twice, so I almost died at birth and I was born with developmental disabilities,” she said. “My parents took me to physical therapy everyday and my parents worked with me at home as well. I didn’t speak until after I turned 2-years-old, but through therapy I actually became super-strong. I was climbing ropes with just my bare hands and everything. I overcame everything and today I’m completely fine.”

In fact, she was better than fine. She said that through her difficult upbringing she had realized her true calling in life and when she got older she set out to help children in need in the same way that she herself had been helped.

“I knew right away what I wanted to do,” she said. “When I went to school I went right into the Doctorate of Physical Therapy program and once I earned my doctorate, I got right out there and said, ‘Pediatrics here I come.’”

Palazzo is a physical therapist who has always worked in pediatrics, including acute and sub-acute care. While first working at the Elizabeth Seton Pediatric Center in Chelsea, she gained a great deal of experience engaging with youngsters with very rare conditions. It was there that she fell in love with a 4-year-old girl from Africa afflicted with a serious case of Down syndrome. Through her dedication she helped this child to overcome many hurdles—including serious heart and respiratory issues—to the point that she was actually able to serve as Palazzo’s flower girl when she got married in 2010.

While later working at a Down syndrome school in Plainview, she saw a need for children with disabilities to engage in activities outside of just physical therapy and class, especially to help develop social skills.

“I really came up with the idea of my own gym early on, but being married and having two children of my own, things just kept getting pushed back and back,” she said. “Finally, I said, I have to just do this. I’d been dreaming about it for years already.”
She initially started More Than A Gym as a weekend program by subletting an area of a CrossFit facility in Westbury. However, within a few months they outgrew the space and it was then that she moved to her current location in Syosset where they converted a warehouse into their current facility, which first opened its doors in April of 2015.

In order to make sure that her students are grouped in the most beneficial way possible, all new attendees must go through an evaluation so the best program for the child’s specific needs can be determined. Classes at More Than A Gym, according to Palazzo, center around studies that note that movement helps cognitive function and speech, which are all interrelated.

“It started out with running one-on-ones and groups focusing on socialization and motor function, but then it exploded when people expressed needs for other things such as yoga and dance. People are even asking for adaptive martial arts,” she said. “We evolved into more of a sensory gym, but we also offer a variety of physical, speech and occupational therapies, and we show their parents what to do so those therapies can carry over at home as well.”

In addition to the classes at the Syosset facility, More Than A Gym also works with outside preschool programs in Nassau County, as well as offering home therapy as well and services to ages ranging from birth until young adult.
Despite working at More Than A Gym tirelessly almost every day, each and every week with her staff of experienced therapists, Palazzo said that it’s all worth the effort when she sees a child taking the same hard-fought steps toward a bright future that she herself took all those years ago, half a world away.

“I feel very proud, that’s all I can say,” she said. “My husband is an accountant, and sometimes he’ll look at the numbers and ask me if this is making sense, but you know what? One of my kids may have done something for the first time or spoken their first word ever in my class because of an impact I made in their life and that’s an amazing thing. And to be able to give that gift to them, their parents and myself is remarkable.”
For more information, visit www.morethanagym.com.