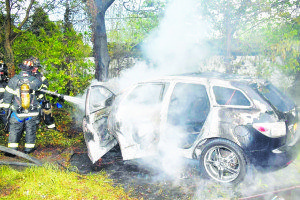 The Syosset Fire Department responded to multiple calls of a car into a tree and on fire on the South Service Road by South Oyster Bay Road. The driver was injured and able to get out of his car before it was engulfed by flames. Syosset fire fighters extinguished the fire.

—Story and photo by Kevin Imm