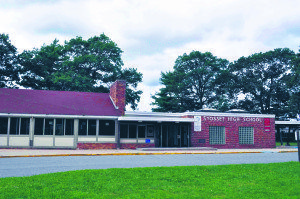 All eyes were on Syosset earlier this month when a plane went down on Cold Spring Road, but Syosset Schools Superintendent Dr. Thomas Rogers’ eyes were on safety.

The fatal crash was during the afternoon hours of May 3, just as some students and staff members of the Syosset Central School District were headed home. The incident, which left all three passengers on board dead, shut down all movement at three of the district’s campuses, but Rogers said his team was buzzing inside to make sure protocol was followed and students were kept safe.

“There’s nothing in the superintendents’ playbook on how to handle a plane crash,” he said. “You do have to call some audibles.”

The National Transportation Safety Board said in a preliminary report after the crash this month that two men and a woman were on board the plane when it broke apart midair around 3:45 p.m. The plane and its passengers— David Berube, 66, his girlfriend Dana Parenteau, 49, and Benjamin Bridges, 32—was traveling from South Carolina to Connecticut.

Once news of the crash made its way to the school, Rogers said the district jumped into action, following an emergency response system that kicks in during any emergency facing schools.

Rogers’ first order of business in the aftermath of the crash was safety.

“We investigate everything. There is nothing we poo-poo,” he said. “Student and staff safety is first. We’re looking to ensure all safety before we even try to get the full understanding of the event.”

Students and staff were called indoors, within the walls of Syosset schools, as the nerve center of the district worked to gather information. Rogers referred to the system as a “shelter-in-place” protocol, which ensures all staff and students take immediate shelter within the building.

The next order of business, which Rogers said was a key component of the district’s handling of emergencies, was communication. The Syosset Central School District Facebook page and website became up-to-the-minute bulletin boards, letting anyone and everyone know exactly what the district was doing to ensure its people were safe. Automated phone calls were also sent out to the district parents, reading the exact scripts posted online.

“We try to periodically communicate with parents,” Rogers said. “We’re letting people know our condition hasn’t changed. It’s a way of being responsive to the community.”

And in doing so, Rogers said parents picked up the rest of the slack themselves in the hours after the crash by cooperating and heeding the district’s pleas to stay away until it safety was ensured.

“Parents showed tremendous cooperation,” he said. “We didn’t have to deal with any additional challenges to manage, thanks to them.”

And it’s not just physical safety that Rogers said the district took into account. Another key component of the emergency response systems in place at Syosset schools, he said, focused on protecting the psychological health of the students and staff as well.

“We have a very talented staff of psychologists across the district that are always ready to pitch in,” he said.

A lot went on behind the scenes, well beyond the immediate physical or psychological safety of the students, too. Rogers said staff members were coordinating, on the fly, to make sure students were supervised as they waited for more information. The district also had to craft up new school bus runs so drivers could navigate through road closures enacted after the crash.

“Like in any emergency, it was an all hands on deck attitude,” Rogers said of his team. “This went long into the night, but we stayed light making plans. We always err on the side of caution.”