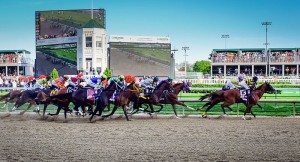 Owners, jockeys and the horses they rode in on are in the midst of the latest grab for the Triple Crown. May 7 saw Nyquist win the Kentucky Derby, the first leg of said crown, to the delight of thousands watching at Churchill Downs and at home. Then Preakness will soon follow before the sport lands on Long Island at the Belmont Stakes.

No word on how the horses feel about it, although, one might venture a guess that the equines are not all that fond of the little men cracking whips into their side or of the proud owners counting money and laying garland in the winner’s circle. The ugly truth about horse racing is that it is not a glamorous, so-called “sport of kings,” but rather, it is ripe with exploitation, cruelty and premature horse deaths.

Once a thoroughbred loses a handful of races, where does it go? Does it go to a farm paradise where it spends the remainder of its days studding it up with a broodmare in idyllic serenity? Not exactly. While some end up in sanctuaries, others are sent to auction and transported into Mexico and Canada where they end up in a slaughterhouse.

In some cultures, there is nothing taboo about eating horse meat. Just like in America, for some reason, there is nothing taboo about riding a horse to death. The people who abhor the idea of restaurants serving horse meat are the same people who don sun hats and sip mint juleps as these animals are forced to race around a track, willed on by a whip.

Most horse racing fans are not heartless animal haters. They are naive spectators, excited by the thrill of the race and the fanciness of the entire affair. The horses, however, are unwilling participants who would probably prefer to engage in their natural urge to run for themselves, not for some pulsating crowd.