At the south end of Longboat Key, there’s an artificial stream at the edge of a golf course which often has wading birds and ducks. For years I’ve been telling myself I have to go there. On a recent Sunday afternoon, I did, and it was truly eye-opening.

Parking in a makeshift lot by a drawbridge, I start walking back to the stream. Across the road is an osprey nest built on a power pole and over a green sign. It’s a juvenile, but the size of an adult. It’s calling and wants to be fed. High over the trees comes an adult “packing” a fish. The osprey wiggle waggles, after passing the nest, perhaps a signal to the juvenile that it will be back.

When I get to the stream, there’s an unfamiliar ibis—“what is it?” There can be only two kinds of ibis here, white ibis and glossy ibis and this looks like neither. It is palomino-colored with streaks of brown, gray and white with the not-quite red bill that juvenile white ibis have before they take on their all-white adult plumage. This is an almost adult white ibis, but what a specimen. I would like to get closer to these ibis, but they cross the stream to the other side. There’s a lone roseate spoonbill on a walkway on the golf course doing nothing. This is one of the two birds I especially wanted to see, but it’s a strike out.

There are a lot of ducks here and a very colorful male. It has a dark-green head, black bill, with a rich rust-colored back and white sides. At first I think that it’s wood duck, but it’s not colorful enough and there is no red on the bird. A number of the others are nondescript brownish females. One pair paddles in and out of images of trees and bushes in the water.

Later I realize, looking at their prodigious bills, that they are Northern shovelers, rare here in spring. I follow them the length of the stream until it curves onto the course. There are a group of golfers teeing off and I duck behind a thick mangrove tree as a precaution. Later I find one of them trying to fish a ball out of the stream. Take precaution here. There are two mute swans here, the other bird that I came for, but they are on the grass doing nothing with several cormorants lounging nearby. 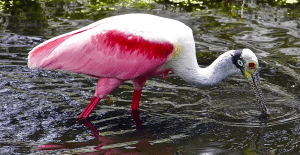 Following the stream back, the roseate spoonbill is in the water feeding by the near edge just out of sight. It’s a large white bird with red slashes on either side, a pink flush and the long gray bill which is the shape of a wooden Dixie-Cup spoon. Other-worldly looking, I call it “the bird from Mars.” Coming to the spot, I see a tricolored heron working the other side of the stream. It’s a large wading bird that is gray, white, wine colored and yellow by the front of its neck and breast. This one has some of that which is very faded and the base half of its bill is a bright robin’s egg blue. I‘ve never seen a tricolored with that color bill. The short white breeding plume waving from the back of its neck may explain this. Maybe it changes during the breeding season. Am I in Africa or Central America looking at an unfamiliar exotic species? Well, South Florida is tropical.

The spoonbill is smart to feed by the steam’s edge where the water is shallow. It sweeps part of its bill underwater side to side, then it snaps shut in a millisecond when it touches prey. However, the spoony soon moves to the stream’s center behaving like a runaway vacuum. The spoonbill strides purposefully, sweeping its bill side to side fast, turns on a dime and goes back in the other direction, then returns churning the water as it moves.

Meanwhile, the tricolor moves short distances very quickly, striking the water for prey. It’s also an exciting bird to watch. With wings partially cupped and feathers splayed, it jumps/flies a few feet and gets something. The two pass virtually inches from one another and seem to easily co-exist. The tricolor walks the other way and soon the spoonbill is following it—perhaps to get prey stirred up by the heron.

After a while of going up and back, I’m hot and tired. Passing the osprey nest, unexpectedly an adult osprey is flying low directly overhead. I get the closest look ever at its legs and the fish it is carrying to hungry mouths. Within seconds, hearing a call, I turn around to see another “fish-hawk” flying low just overhead, bigger than God-almighty, as it comes closer and closer. The bird flies to a nest off a service entrance road. When it lands the osprey flaps its wings while standing next to a chick. Unlike the other ospreys, they’re not feeding.

My wife flips out over the images of the immature ibis. Pictures of the spoonbill show movement in the water from both its legs and bill suggesting its energy. The bill is more complex than I would have imagined. The tricolor is more exotic than it was in the water and now I’m perplexed about its identity.

Having had no Internet service for three weeks, I send my best images to an authoritative Sarasota birder from the airport when we flew home. That night I received an answer. It is a tricolored heron in high breeding plumage. During that time, the bill’s base gets bright blue and the legs red. The breeding season. I’m blown away. I’ve never seen these color changes illustrated in any field guide. Man, I’m flying high, and not on JetBlue. 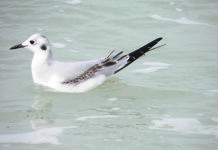 Bonaparte’s On A Beach 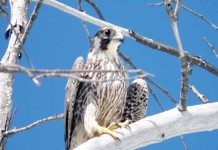 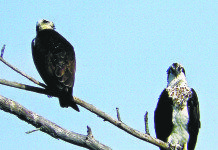