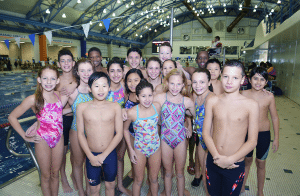 After a number of years with one location in Garden City, Long Island Aquatic Club recently announced a new swim school in Syosset to teach even more Long Island kids how to swim and how to swim well.

Long Island Aquatic Club (LIAC) has built a tradition of growing winners, with impressive success stories and acclaim over the last 20 years. Coach Ginny Nussbaum has been named one of the top 10 age group coaches in the U.S. for 2015 by American Swim Coaches Association and Long Island Aquatic Club founder Dave Ferris is a SwimAmerica program director and a Level 5 USA Swimming coach, which is the highest level awarded.

And as for the kids and their achievements, LIAC 11-12 year-old girls set the age group 4×100 Freestyle Relay USA National Record in 2015. The club finished 14th out of 2,500 USA Swim Clubs in the 2015 Long Course Season in USA Swimming Virtual Club Championship. Meanwhile, LIAC has competed in the last five U.S. Swimming Olympic Trials with 17 different swimmers and has won an unprecedented 15 consecutive Junior Metropolitan Team Championships.

Add to that impressive track record the fact that LIAC has sent swimmers to more than 100 university swim programs, including all eight Ivy League schools.

“We like to let the kids’ accomplishments speak for themselves,” said coach Ginny Nussbaum.

And Ferris said that nearly four decades of coaching has refined the Aquatic Clubs approach and produced a top tier breed of swimmer.

“When you work at a system for coaching swimmers over the time span of 36 years, you figure out what inspires kids to swim with all their hearts,” he said. “And then you teach them the technique that lets them win with that spirit.”

Ferris said that when it comes to teaching children swimming, excellence is something LIAC strives for every day whether it is a child’s first time in the pool or an elite swimmer’s Olympic Trial. For more information visit Longislandswimschool.com or call 516-378-8467.