Elardo led all seniors with 52 catches, totaling 876 yards with an average of 19 yards per catch this season. He also scored six touchdowns, leading the Braves to a return trip to the playoffs. During his three-year varsity career, Elardo totaled 154 catches and 2,941 yards with a 19.1-yard average per catch and 28 touchdowns. He is also a two-time All-Long Island selection, 2015 Conference Player of the Year and was named First-Team All-State last season (this year’s announcement pending). 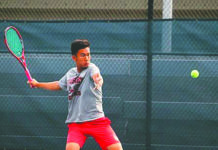