Esslinger, who currently teaches AP Language and AP Literature as well as creative writing and public speaking courses, has been with Syosset for more than 40 years, during which she has taught nearly every English course offered and, for 20 years, directed the spring musical.

Former student Zubair Merchant, who was enrolled in Esslinger’s AP Language course during his junior year, nominated her for the award. Merchant also captained the Forensics Speech and Debate team, which Esslinger still coaches.

“Frequently, Zubair would stop by at the end of the day and ask if I needed him to do anything. He was always very willing to stay late to help others on the team do well. That is the case with a lot of these kids,” said Esslinger of the team, which has been one of the most consistently successful co-curricular clubs through the years, often winning awards and recognition as a top debate team in the state and country. “I hope I helped to set a standard for these students. I know a lot of their success is due to their willingness to help each other.”

The University of Chicago’s Office of College Admissions grants the Outstanding Educator Award to teachers who have demonstrated exceptional dedication to the education and mentorship of their students. University freshmen have the opportunity to nominate a former teacher who has influenced them significantly.

“Each year, we invite entering first-year students to nominate an educator who has changed them, challenged them or helped them along the path to intellectual growth,” said James Nondorf, the University of Chicago’s vice president for enrollment. “We receive back hundreds of letters from students inspired by teachers who have changed the course of their lives [and] taught them to reimagine texts, delve deeper into problem-solving and think beyond the borders of the classroom in the pursuit of their own education.”

“It’s such a great honor to be recognized,” said Esslinger. “I have a great deal of respect for the University of Chicago.” —Syosset Schools 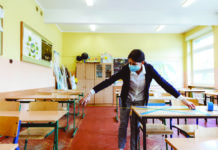 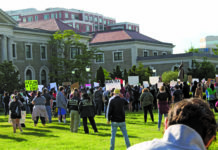 Long Islanders Protest To Have Their Voices Heard