Social media distracts everyone, as even the most professional of adults will shirk real-world responsibilities in favor of retweets and red notification icons. But when the parents of two Syosset youngsters had the bright idea to help their daughters refocus on school obligations by prohibiting social media use, an inspiring endeavor was set in motion.

This social media impediment stirred sisters Rachel and Jillian Roth to start Inspire Bright, a nonprofit organization aiming to inspire bright young minds to make a difference and help other teens and young adults through a wide range of efforts.

“We were obsessed with social media, like most people our age,” said Rachel, 18. “We needed to find something else to do and this was a natural fit for us. We’re both social and outgoing, this was a way to put our time into something greater.”

The pair of industrious teens have raised money for numerous well-deserving organizations and causes, including Sunrise Day Camp, a summer camp for children with cancer and their siblings. Rachel and Jillian teamed up with SoulCycle Woodbury for a charity ride to raise money to provide a creative outlet for the kids at the camp. The money the raised will help leadership at the camp create a permanent wall mural for the kids to beautify.

It is an endeavor near and dear to the hearts of the Roth girls, who experienced a loss due to cancer recently.

“We were very much connected with it,” said Rachel. “And it’s something that so many people can connect with.”

Recently, the sisters also participated in the Arrive Alive Tour at Syosset High School, enlightening fellow teens about the dangers of texting and driving. For that event, they raised money at a local Chipotle in order to act as co-sponsors of the tour.

“I don’t think people my age realize how dangerous texting and driving really is. They think it’s just a statistic and it can’t happen to them,” Jillian said about the Arrive Alive Tour, which put teens in a driving simulator to show them how deadly it is to text behind the wheel. “Until you are put in that position, you are largely unaware of the dangers. It can happen to anyone.”

“We feel so fortunate to have what we have,” said Jillian, 16. “We wanted to get involved and help others who are maybe not as fortunate as us.”

Rachel said Inspire Bright has helped her and Jillian to look beyond their own lives in Syosset. She believes young people often have trouble putting themselves in other peoples’ shoes and seeing the world from different perspectives. With Inspire Bright, they found a way to expand their teenage horizons.

“It broadens our horizons a lot,” said Rachel. “We’re in a bit of a bubble in Syosset. We often don’t experience things that other people our age are dealing with. That’s what makes our organization as interesting as it is—it helps young people help others their own age.”

As their young organization continues to move forward, Rachel and Jillian said the community has been so supportive in all their efforts that they are inspired to dream up bigger and better charitable ideas.

“We definitely want to take Inspire Bright to the next level,” said Rachel. “It’s so great to have the support of people around us, that helps, but you have to be passionate about helping people in order to succeed.”

And for any other teen-aged youths that think they are too young to make a difference, Jillian and Rachel are shining example that a drop of inspiration—even presented as punishment—can bear a bright idea.

“I would tell young people that the only thing holding you back, is you,” said Jillian. “If helping others makes you happy and you are passionate about it, you will make a difference.” 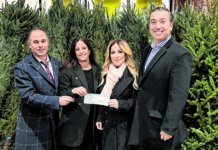