In late May, Long Island Lutheran, located in Brookville, was honored at its annual Spring Sports Awards by Team Up 4 Community, an international community giveback project of the W20 Foundation that was formed by former Islander Steve Webb in 2007. The Foundation focuses on building character among athletes through the promotion and collaboration of community service and social responsibility.

Throughout the school year, LuHi students and student athletes have participated in a large variety of service projects including; Habitat for Humanity Builds, Toys for Tots collections, putting together Thanksgiving baskets, and our LuHi Meal Packing Event for which we were honored. On hand for the $1500 check presentation was Steve and Theresa Webb, founder and director of Team Up 4 Community and Jim Flaherty and Marialice Dunphy, NBTY Helping Hands, Vice President and Director.

Mr. Webb took time to address student athletes and their families gathered for the awards ceremony to reinforce the importance of giving back to one’s community and congratulated the school for their second place finish in the Foundation’s Spring into Action Challenge.

This is the fourth year LuHi has hosted its Meal Packing Event and we were pleased to pack 316,224 meals. The completed meal packets were then distributed to Island Harvest, the Freeport Emergency Food Pantry, New Ground and other local food pantries in need. Additional meal packets were being shipped to the Andrew Grene School outside of Port au Prince, Haiti, an official feeding site that will prepare and serve the food to children in need. 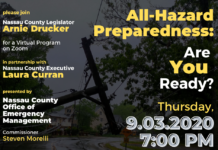